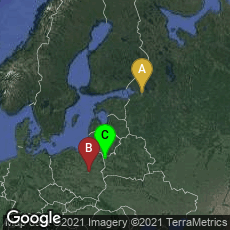 The Nazis Destroy the Zaluski Library, the Largest Library in Poland During the Warsaw Uprisingin October 1944 the German army destroyed the Załuski Library, the first Polish public library, and the largest library in Poland. "Only 1800 manuscripts and 30,000 printed materials survived."

The Zaluski Library was built in Warsaw from 1747 to 1795 by bishops Józef Andrzej Załuski and his brother, Andrzej Stanisław Załuski. After the Kościuszko Uprising, the Russian troops acting on orders from Czarina Catherine II looted the library and dispatched them to St. Petersburg, where it became a nucleus of the Imperial Public Library, now the National Library of Russia.

"Parts of the collections were damaged or destroyed during the plunder of the library and the subsequent transport. According to the historian Joachim Lelewel, the Zaluskis' books, 'could be bought at Grodno by the basket'."

"The collection was subsequently dispersed among several Russian libraries. Some parts of the Zaluski collection came back to Poland on three separate dates: 1842, 1863. In the 1920s, in the aftermath of the Polish-Soviet War and the Treaty of Riga the Soviet Union government returned around 50,000 items from the collection to Poland" (Wikipedia article on the Zaluski Library, accessed 12-02-2008).