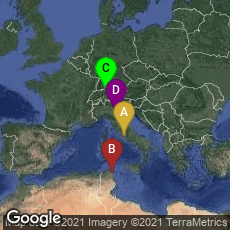 The Earliest Surviving Document of the Christian Book Trade and Stichometry Thaschus Cæcilius Cyprianus, bishop of Carthage, as depicted in an icon in a Russian Orthodox church in Germany.

The earliest surviving document recording the Christian book trade is a stichometric price-list of books of the Bible and of Cyprian's works called the Indiculum Caecilii Cypriani. This was written in Africa, probably in Carthage shortly after 350. The charges for writing in Latin are calculated on a per line basis, using the length of a typical line of Virgil (Vergil) or 16 syllables, as the standard, or stichos. Lines measured in this way were called stichoi (στιχοι or επη) from the Greek standard based on the length of an average Homeric hexameter, similarly consisting of 16 syllables. Our source for this Greek writing standard is Galen, De Placitis Hippocratis et Platonis (On the Opinions of Hippocrates and Plato) Viii.I.

One motive that the anonymous author of this text seems to have had was to provide a method of checking up on dishonest scribes and booksellers. He wrote:

"Because the index of verses in Rome is not clearly given, and because in other places too, as a result of greed, they do not preserve it in full, I have gone through the books one by one, counting sixteen syllables per line, and have appended to each book the number of Virgilian hexameters it contains" (Translated in Rouse & McNelis, 205).

In their study of the Indiculum Caecilii Cypriani Rouse & McNelis (reference below) state (p. 202) that "the use of stichometry seems to die in the Latin West in late antiquity."

The earliest surviving text of this work is the collection of texts called Cod. Sang. 133, preserved in the Abbey library of St. Gall (St. Gallen), and probably written there in the late 8th or early 9th century. Chronologically, the next surviving copy of this text is Vitt. Em. 1325 (formerly Cheltenham or Phillipps 12266), written at Nonantola Abbey in the 10th or early 11th century, and now preserved in the Biblioteca Nazionale Centrale di Roma.

In February 2014 a digital facsimile of Cod. Sang. 133 was available at this link.