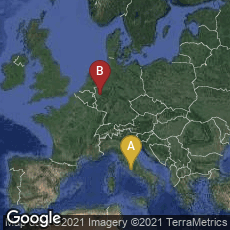 The production of manuscripts, and evidence of interest in books, did not begin in Germany until the last third of the eighth century, just before the reign of Charlemagne.

"Few books written before this period were preserved in cathedral libraries. A codex written toward the year 700 for Basinus, who was perhaps the bishop of Trier, is preserved in the Bibliotheca Vallicelliana. Two manuscripts of canon law, one written in South France at the time of Gregory the Great, the other written about a century later in Northumbria, are still the property of the Cathedral of Cologne, to which they probably already belonged in the eighth century" (Bischoff, Manuscripts and Libraries in the Age of Charlemagne [2007] 18).