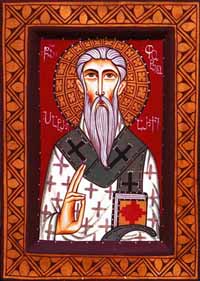 About 850 CE Byzantine Patriarch Photios I (Photius) of Constantinople wrote the Bibliotheca or Myriobiblon, dedicated to his brother Tarasius and composed of 280 reviews of books which he had read. Photios did not supply the title, and what he wrote was not meant to be used as a reference work, but it was widely used as such in the 9th century, and is generally seen as the first Byzantine work that could be called an encyclopedia. The works Photius noted are mainly Christian and pagan authors from the 5th century BCE to his own time. Almost half the books mentioned no longer survive.

According to Reynolds and Wilson,

"one of his [Photius's] duties was to take part in a diplomatic mission—the date is uncertain, but it may have been 855—with the task of negotiating an exchange of prisoners of war with the Arab government. Before going on a long and dangerous journey Photius wrote, as an offering and consolation to his brother Tarasius, a summary of books that he had read over a long period of time, omitting some standard texts that Tarasius might been have been expected to know. The resulting work, known as the Bibliotheca (this title is not due to its author), is a fascinating production, in which Photius shows himself the inventor of the book-review. In 280 sections which vary in length from a single sentence to many pages Photius summarizes and comments on a wide selection of pagan and Christian texts (the proportions are nearly equal, and 122 deal with secular texts). He claims to have compiled it from memory, but it is generally regarded as a revised version of the notes he had made in the course of his reading in the last twenty years. it is not arranged according to any plan. Photius claims that the order of the authors reviewed is that in which they occurred to him, and he had not the time to be more systematic. The text exhibits lacunae and duplicates. Its oddly unfinished state makes one wonder if the embassy did not actually take place, so that Photius never bothered to finish his work once the original reason for composing it had disappeared. Its value to the modern scholar is that it summarizes many books that are now lost: that applies for example to some twenty of the thirty-three historians he discusses. . . " (Reynolds & Wilson, Scribes and Scholars 3rd ed [1991] 62-63).

"To Photios we are indebted for almost all we possess of Ctesias, Memnon, Conon, the lost books of Diodorus Siculus, and the lost writings of Arrian. Theology and ecclesiastical history are also very fully represented, but poetry and ancient philosophy are almost entirely ignored. It seems that he did not think it necessary to deal with those authors with whom every well-educated man would naturally be familiar. The literary criticisms, generally distinguished by keen and independent judgment, and the excerpts vary considerably in length. The numerous biographical notes are probably taken from the work of Hesychius of Miletus" (Wikipedia article on Photios I of Constantinople).