With a page size of 1.8 m x 1.4 meter, this atlas falls into the category of the largest printed books ever issued. 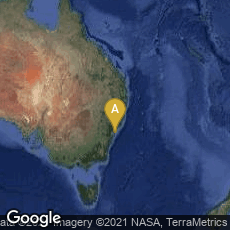 "Earth": The Largest Atlas Ever Published as a Printed Book In 2008 Gordon Cheers of Millennium House, North Narabeen, Australia, published a world atlas called Earth. The World Atlas. Containing 576 pages with 154 maps and 800 photographs, the volume measured 610 x 469 millimeters and weighed over 30 kilos. The publishers described it as the largest atlas ever published as a printed book.

In December 2013 a virtual tour of a few pages of the atlas was avilable from the Millenium House website at this link.

The book was offered for sale in two versions: "Royal Blue," limited to 2000 copies, and available in bookstores, and "Imperial Gold," limited to 1000 copies and for sale only by Millenium House. In October 2009 Amazon.com offered a copy of an unspecified version for about $7200 plus $3.99 shipping and handling. There was also a regular trade edition available in a 325 x 250 mm format called Earth Condensed.

When I revisited the Millenium House website in March 2012 I noticed that the publishers had surpassed their previous size record by producing the Platinum edition of their atlas in an enormous 6 foot x 4.5 foot format (1.8m x 1.4m) in an edition limited to 31 copies at the price of $100,000 USD per copy. As they stated:

"Once in a lifetime, the opportunity comes along to acquire something truly exquisite and unique—a piece of history, a rare collectible, a masterpiece... EARTH Platinum Edition is such an acquisition. With only 31 individually numbered copies of this immense, limited edition atlas available, this beautifully presented book will be sought after by fine institutions and discerning collectors. Superb cartography is displayed on the massive pages when opened: each spread measures a breathtaking 6 feet x 9 feet (1.8m x 2.7m), presenting an unsurpassed view of the world...."

Though I was unsure whether the original 2008 version of Earth. The World Atlas was, as the publisher's claimed "the largest atlas ever published as a printed book," we can safely say that the enormous Platinum edition knocks out any previous competition in the size category.