Athanasius Records the Process of Canonization of the New Testament 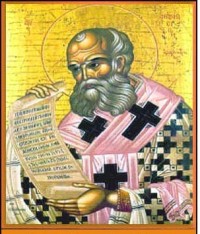 In his Easter letter of 367, Athanasius, Bishop of Alexandria, provided a list of exactly the same books as what would become the 27-book New Testament canon, and he used the word "canonized" (kanonizomena) in regards to them.

"Thus some claim, that from the fourth century, there existed unanimity in the West concerning the New Testament canon (as it is today), and that by the fifth century the Eastern Church, with a few exceptions, had come to accept the Book of Revelation and thus had come into harmony on the matter of the canon. Nonetheless, a full dogmatic articulation of the canon was not made until the Council of Trent of 1546 for Roman Catholicism, the Thirty-Nine Articles of 1563 for the Church of England, the Westminster Confession of Faith of 1647 for Calvinism, and the Synod of Jerusalem of 1672 for the Greek Orthodox" (Wikipedia article on Development of the New Testament canon, accessed 12-07-2008).