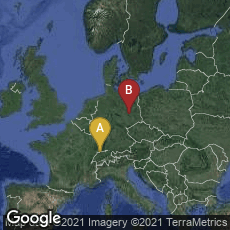 The publication was instigated by Martin Luther who found a complete manuscript copy of the 12th century Latin translation of the Qur'an by Robert of Ketton in Wittenberg, and turned it over to Bibliander for publication.

"Printing was carried out speedily and under pressure, without the knowledge of the authorities, but news got out before work was completed. The edition was seized and the printer arrested. After lengthy negotiations involving reformers (Luther and Melanchthon included) and authorities in Zurich and Strasbourg, the city council of Basel released the work on condition that neither Basel nor Oporinus were mentioned on the title page, and that the edition should be sold from Wittenberg and provided with a preface by Luther" (Detlev Auvermann, Guillaume Postel (1510-1581), London: Bernard Quaritch, Catalogue 1343 [2006] no. 9).

Only some of the copies were issued from Wittenberg with Luther's two-page preface stating that the purpose of the work was to make Islamic texts available for study and refutation. Later issues without the preface were sold in Basel.  The work was issued by Oporinus in 1543 with the verbose title of:

Machumetis Saracenorum principis eiusque successorum vitae ac doctrina ipseque Alcoran quo. . . .D. Petrus abbas Clunicacensis per viros eruditos, ad fidei Christianae ac sanctae patris Ecclesiae propugnatio curavit. His adiunctae sunt Confutationes multorum, & quidem probati [ss]imorum authorum, Arabum, Graecorum,  & Latinorum, una cum excellenti[ssimi] Theologi Martin Lutheri praemonitione. (The Lives and Teachings of Muhammed, prince of the Saracens, and his sucessors, as well as the Koran. . . .which the Lord Abbot Peter of Cluny had translated into Latin from the Arabic language by learned faith and of Holy Mother Church. To these have been added the Refutations by many of the most worthy Arabic, Greek, and Latin authors, together with a foreword by the most excellent theologian, Martin Luther.)

In February 2014 there were several digital facsimiles of the first printed edition available. A digital facsimile of the variant without Luther's forward was available from Universitätsbibliothek Basel at this link.