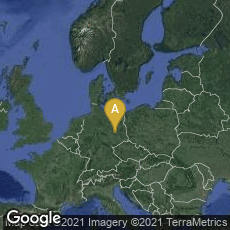 In Wittenberg, Germany, in 1543 Martin Luther published a 65,000 word treatise Von den Jüden und iren Lügen (On the Jews and their Lies).

"In the treatise, Luther writes that the Jews are a 'base, whoring people, that is, no people of God, and their boast of lineage, circumcision, and law must be accounted as filth.' Luther wrote that they are 'full of the devil's feces ... which they wallow in like swine,' and the synagogue is an 'incorrigible whore and an evil slut . . .' He argues that their synagogues and schools be set on fire, their prayer books destroyed, rabbis forbidden to preach, homes razed, and property and money confiscated. They should be shown no mercy or kindness, afforded no legal protection, and these 'poisonous envenomed worms' should be drafted into forced labor or expelled for all time. He also seems to advocate their murder, writing '[w]e are at fault in not slaying them.'

"The prevailing scholarly view since the Second World War is that the treatise exercised a major and persistent influence on Germany's attitude toward its Jewish citizens in the centuries between the Reformation and the Holocaust. Four hundred years after it was written, the National Socialists displayed On the Jews and Their Lies during Nuremberg rallies, and the city of Nuremberg presented a first edition to Julius Streicher, editor of the Nazi newspaper Der Stürmer, the newspaper describing it as the most radically antisemitic tract ever published. Against this view, theologian Johannes Wallmann writes that the treatise had no continuity of influence in Germany, and was in fact largely ignored during the 18th and 19th centuries. Hans Hillerbrand argues that to focus on Luther's role in the development of German antisemitism is to underestimate the 'larger peculiarities of German history.'

"Since the 1980s, some Lutheran church bodies have formally denounced and dissociated themselves from Luther's writings on the Jews. In November 1998, on the 60th anniversary of Kristallnacht, the Lutheran Church of Bavaria issued a statement: 'It is imperative for the Lutheran Church, which knows itself to be indebted to the work and tradition of Martin Luther, to take seriously also his anti-Jewish utterances, to acknowledge their theological function, and to reflect on their consequences. It has to distance itself from every [expression of] anti-Judaism in Lutheran theology.' (Wikipedia article On the Jews and their Lies, accessed 12-08-2008; see also the larger Wikipedia article on Luther and Antisemitism).