Woodcut, Cologne 1521, showing the humanist Johannes Reuchlin  (kneeling) and wringing his hands while Johannes Pfefferkorn stands by him in a master's robes. 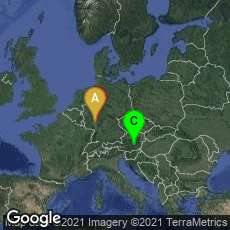 Maximilian I Orders the Confiscation of Jewish Books, but Eventually Rescinds the Order Portrait of Maximillian I by Albrecht Dürer. Kunsthistorisches Museum, Vienna.

Influenced by Johannes Pfefferkorn, a German-Jewish Catholic theologian and writer, who had converted from Judaism, and who devoted his career to preaching and writing against Jews and attempting to convert them to Christianity, Maximilian I, Holy Roman Emperor, ordered Jews to deliver to Pfefferkorn all books opposing Christianity. He also ordered the destruction of any Hebrew book except the Hebrew Bible. Previously Maximilian had expelled the Jews from Styria, Carinthia, and Carniola. The justification for confiscating their books was that depriving the Jews of their religious texts would be the first step in their conversion.

"Pfefferkorn began the work of confiscation at Frankfort-on-the-Main, or possibly Magdeburg; thence he went to Worms, Mainz, Bingen, Lorch, Lahnstein, and Deutz.

"Through the help of the Elector and Archbishop of Mainz, Uriel von Gemmingen, the Jews asked the emperor to appoint a commission to investigate Pfefferkorn's accusations. A new imperial mandate of 10 November 1509, gave the direction of the whole affair to Uriel von Gemmingen, with orders to secure opinions from the Universities of Mainz, Cologne, Erfurt, and Heidelberg, from the inquisitor Jakob Hochstraten of Cologne, from the priest Victor von Carben, and from Johann Reuchlin. Pfefferkorn, in order to vindicate his action and to gain still further the good will of the emperor, wrote In Lob und Eer dem allerdurchleuchtigsten grossmechtigsten Fürsten und Herrn Maximilian (Cologne, 1510). In April he was again at Frankfort, and with the delegate of the Elector of Mainz and Professor Hermann Ortlieb, he undertook a new confiscation.

"Hochstraten and the Universities of Mainz and Cologne decided in October 1510 against the Jewish books. Reuchlin declared that only those books obviously offensive (as the Nizachon and Toldoth Jeschu) would be destroyed. The elector sent all the answers received at the end of October to the emperor through Pfefferkorn. Reuchlin reported in favor of the Jews, and on May 23, 1510, the emperor suspended his edict of 10 November 1509, and the books were returned to the Jews on June 6" (Wikipedia article on Johannes Pfefferkorn, accessed 12-10-2008).

Not satisfied with the Emperor's decision, between 1511 and 1521 Pfefferkorn engaged Reuchlin in a pamphlet war on the topic, reflective of the battle between Dominicans and the humanists, and outlined in the Wikipedia article cited above.