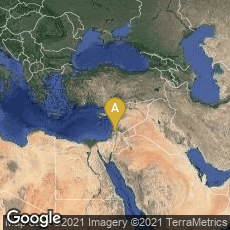 The Earliest, Most Significant Rabbinic Texts Are Preserved in Stone 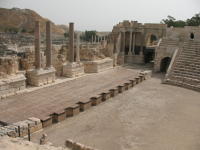 The most significant archaeological evidence for the textual history of rabbinic literature, and particularly of its halakhic component, was uncovered between 1974 and 1980 in the ancient synagogue of Rehov, a site located five kilometers south of the Decapolis city of Scythopolis, called in Hebrew, Beit Shean. Stone and mosaic inscriptions found at Rehov contain extensive passages of legal material relating to biblical agricultural law that are well known from rabbinic sources. The Rehov inscriptions reformulate and apply these classical rabbinic texts to life in the Beit Shean Valley during the Byzantine period, the closing years of the redaction period of the Mishnah and the Talmud.

"The synagogue of Rehov was built in three phases, consisting of a fourth-century basilica enlarged in the fifth-sixth centuries and destroyed (apparently by an earthquake) during renovation and enlargement the following century. The fifth-sixth century synagogue contained a variety of unpublished inscriptions. The excavator notes that 'the columns bore large inscriptions in red paint, some of them in a tabula ansata and a wreath. The inscriptions, in Hebrew and Aramaic on white plaster, included a variety of texts: benedictions, dedications, a list of the priestly courses and a copy of a letter dealing with the laws of tithes in the Sabbatical year.' The so-called 'letter' is of particular interest, as it is the earliest preserved halakhic text yet discovered. According to the excavator, this inscription begins with the word 'Shalom' and contains texts that directly parallel classical rabbinic traditions in Tosefta Shevi’it 4:8–11, Sifre Deuteronomy 51, and Jerusalem Talmud Demai 2:1, 22c–d and Shevi’it 6:1, 36c. The inscription concludes with the phrase: אטרכ ינבלכלע םולש (“peace upon all the people of the town”). S. Lieberman suggests that this text may be a transcription of a letter sent by a beit din (rabbinical court) to Rehov adjudicating practical matters of biblical agricultural law" (Goldstein & Mintz, Printing the Talmud from Bomberg to Schottenstein [2006] no. 1, p. 170.)