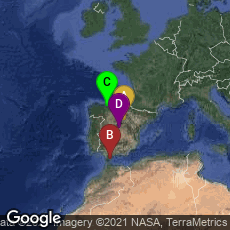 Foundation of the Empire of al-Andalus in Spain Image Source: en.wikipedia.org
Al-Andalus and Christian kingdoms c. 1000 CE, at the apogee of the rule of Almanzor

Under the orders of the Great Umayyad Caliph Al-Walid I, Muslim general Tariq ibn-Ziyad led a small force from North Africa that landed at Gibraltar on April 30, 711. After a decisive victory at the Battle of Guadalete on July 19, 711, Tariq ibn-Ziyad undertook a seven-year campaign, bringing most of the Visigothic-controlled Iberian peninsula under Muslim rule by 718.

Except for the Kingdom of Asturias, the Iberian peninsula became part of the expanding Umayyad empire, under the name of al-Andalus (Arabic: الأندلس‎). The earliest attestation of this Arab name is a dinar coin, preserved in the National Archaeological Museum of Spain in Madrid, dating from five years after the conquest (716). The coin bears the word "al-Andalus" in Arabic script on one side and the Iberian Latin "Span" on the obverse" (Wikipedia article on Al-Andalus, accessed 12-14-2008).