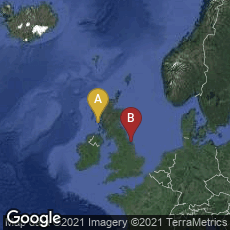 King Oswiu Causes Britain to Embrace the Mainstream of Christianity Image Source: upload.wikimedia.org
A replica of the Sutton Hoo helmet produced for the British Museum by the Royal Armouries.
Sutton Hoo, at Sutton near Woodbridge, in Suffolk, England, is the site of two early medieval cemeteries, from the 6th to 7th centuries.

At the Synod of Whitby held at St. Hild's monastery in Whitby, England, to resolve disputes between the "Roman" church founded by Augustine and the "Celtic" church founded by Columba, King Oswiu of Northumbia decided in favor of the Roman church, ruling that his kingdom would calculate Easter and observe the monastic tonsure according to the customs of Rome, rather than the customs practiced by Iona and its satellite institutions. This decision caused Britain to embrace the mainstream of Christianity.

"Oswiu promoted the faith among his subjects and establishing a number of monasteries, including Gilling Abbey and Whitby Abbey. He was raised in the Celtic Christian tradition of much of the Irish world, rather than the Roman tradition practiced by the southern Anglo-Saxon kingdoms as well as some members of the Deiran nobility, including Oswiu's queen Eanflæd. In 664, Oswiu presided over the Synod of Whitby, where clerics debated over the two traditions, and helped resolve tension between the parties by decreeing that Northumbria would follow the Roman style. Oswiu died in 670 and was succeeded by his son, Ecgfrith" (Wikipedia article on Oswiu, accessed 12-2022).