St.Mark, seated, with his symbol, a winged lion blowing a trumpet and carrying a book "Chi-Rho" monogram at the start of the Gospel of Matthew

Image Source: artdaily.com
Lindisfarne Gospels being installed in the Anglo-Saxon Kingdoms exhibition at the British Library in 2018. 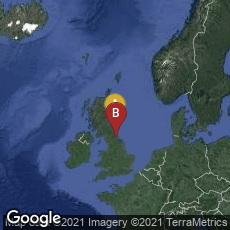 Creation of the Lindisfarne Gospels Between 715 and 720 Eadfrith, Bishop of Lindisfarne, undertook the production of the Lindisfarne Gospels. Among the many features of this masterpiece are the compass marks, grids and lead-point drawings visible on the backs of the carpet pages. These show how the scribe created the designs for the elaborate illuminations, and reflect clear connections with the design methods used in sculpture and metalwork from the region. The Celtic designs of the manuscript observe the rules of sacred geometry, and are thought to reflect a blend of Eastern "eremitic"  and Western monastic traditions.

"Details were added freehand with a lead-point, the forerunner of the pencil. The use of this was apparently invented by the artist-scribe some 300 years ahead of its time as an alternative to the usual hard-point of bone or metal, which would hae trapped the apint of the fine web of oranment in the furrows it produced (as it did not elave a graphic mark on the page but only dented impressions" (Brown, Painted Labyrinth, 34).

According to a colophon added in the tenth century by Aldred at Chester-le-Street, the Lindisfarne Gospels were created by

"the artist-scribe Eadfrith, Bishop of Lindisfarne (698-721); the binder Bishop Aethilwald of Lindisfarne (c. 721-750); the metalworker who adorned the binding or book-shrine (now replaced by a 19-century treaure binding), Billfirth the Anchorite, or hermit (who died sometime before 840). Aldred says that the work was undertaken for God and St. Cuthbert. An inscription added some 250 years later cannot be taken at face value, and Ireland, Echternach in Luxembourg and Jarrow have also been proposed as possible places of production of the Lindisfarne Gospels. However, historical and stylistic evidence indicate that the colophon may be right" (Michelle P. Brown, Painted Labyrinth. The World of the Lindisfarne Gospels [2004] 14).

"The Gospels are richly illustrated in the insular style, and were originally encased in a fine leather binding covered with jewels and metals made by Billfrith the Anchorite in the 8th century. During the Viking raids on Lindisfarne, however, this cover was lost, and a replacement made in 1852. The text is written in insular script" (Wikipedia article on Lindisfarne Gospels, accessed 12-15-2008).

The Gospels were taken from Durham Cathedral during the dissolution of the monasteries ordered by Henry VIII, and were acquired in the early 17th century by Sir Robert Bruce Cotton from Thomas Walker, Clerk of the Parliaments. Cotton's library came to the British Museum in the 18th century, and from there to the British Library.

Brown, The Lindisfarne Gospels. Society, Spirituality and the Scribe (2003).

In February 2014 selected pages from the Lindisfarne Gospels were available from the British Library at this link.