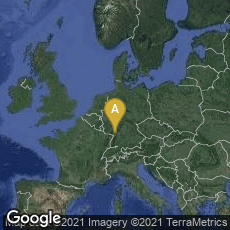 The opening page of this copy of the first edition of the Malleus Maleficarum in the Bayerische Staatsbibliothek includes a manuscript index written at a monastery library. The copy undoubtedly had avid readers in the monastery.

In April 1487 German Inquisitors Heinrich Kramer and Jakob Sprenger published Malleus maleficarum (The Hammer of Witches) in Speyer, Germany at the Press of Peter Drach. This was "without question the most important and most sinister work on demonology ever written. It crystallized into a fiercely stringent code previous folklore about black magic with church dogma on heresy, and, if any one work could, opened the floodgates of the inquisitorial hysteria" (Robbins, Encyclopedia of Witchcraft and Demonology [1959] 337).

Malleus maleficarum became a best-seller, with six editions in the 15th century,  and thirty-six editions published during the witchcraft hysteria up to 1669, and it is thought that its widespread distribution, made possible by printing, contributed to the spread of the witchcraft delusion.

The work owed its authority to three factors:

1. The scholastic reputation of its two authors, the German Inquisitors Sprenger and Kramer.

2. The papal bull Summis desiderantes affectibus of December 5, 1484, which Kramer solicited from Pope Innocent VIII in order to silence the opposition to witch persecution. ISTC no. ii00101500.

3. The detailed procedures for witchcraft trials set forth in the book's third and final part, written for the benefit of civil and ecclesiastical judges. As the leading handbook for witch-hunters, and the first encyclopedia of witchcraft, the Hammer of Witches maintained a pre-eminent position of authority for nearly 200 years, providing both foundation and inspiration for all later European treatises on witch-theory and persecution.

ISTC no. ii00163000. In November 2013 a digital facsimile was available from the Bayerische Staatsbibliothek at this link.