The title page of Newton's Principia. 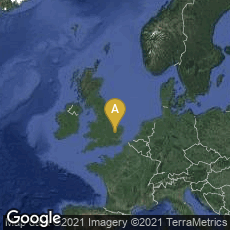 Samuel Pepys' Library: One of the Most Significant Private Libraries Preserved Intact from 17th Century England, in its Original Bookcases A painting of Samuel Pepys by John Hayls, 1666.

The library of diarist Samuel Pepys is one of the most significant private libraries preserved intact from seventeenth century England. At Pepys's death in 1703 it included more than 3,000 volumes, including his diary, kept from 1600-1669, all carefully catalogued and indexed. Preserved at Magdalene College, Cambridge, the library, most of which Pepys collected during the last thirteen years of his life, is arranged by size, from No. 1 (the smallest) to No. 3,000 (the largest), and housed in the original twelve seventeenth-century oak bookcases just as Pepys arranged it.  A peculiarity of Pepys's arrangement was that he wanted each book on each shelf to be the same height, and when any book was shorter than the others he had a wooden base made for it, the visible portion of which was rounded and covered in tooled leather to resemble the spine of the book which would sit on it. Pepys's bookcases, also called presses, are among the earliest surviving examples of bookcases in the modern sense. The fine bindings on the books, mostly done for Pepys, are also significant.

Among the most famous items in the Library are the original bound manuscripts of Pepys's diary, and Pepys's copy of the first edition of Newton's Principia (1687), published under Pepys's imprimatur as President of the Royal Society. The library also includes remarkable holdings of incunabula, manuscripts, and printed ballads.

"Most of his [Pepys's] leisure he now spent on his library. He intensified his search for books and prints, setting himself a target of 3000 volumes. Pepys and his library clerk devised a great three-volume catalogue; collated Pepysian copies with those in other collections; adorned volume upon volume with exquisite title pages written calligraphically by assistants; pasted prints into their guard-books; and inserted indexes and lists of contents" (http://www.magd.cam.ac.uk/pepys/latham.html, accessed 02-28-2015).

Pepys made detailed provisions in his will for the preservation of his book collection. When his nephew and heir, John Jackson, died in 1723, it was transferred intact to the Pepys Library, kept in the Pepys Building on the grounds of Magdalene College.