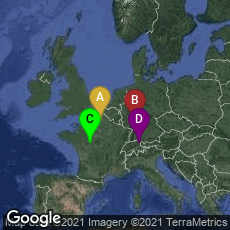 About 7000 Manuscripts and Fragments Survive from the Carolingian Renaissance During the Carolingian Renaissance, a period of "enlightenment" and relative stability of educational and political institutions, scholars sought out and copied in the new legible standardized Carolingian minuscule many Roman texts that had been wholly forgotten. As a result, much of our knowledge of classical literature derives from copies made in the scriptoria of Charlemagne and other scriptoria during the Carolingian Renaissance. Roughly 7000 manuscripts written in Carolingian script survive from the 8th and 9th centuries. The availability of Carolingian manucripts during the Renaissance undoubtedly contributed to their being used as models for Renaissance calligraphy and later for type fonts.

"Thanks to the diversity in local styles of script among the c. seven thousand manuscripts and fragments from the late eighth and ninth century, besides the roughly one hundred which can be localised, other still anonymous large, small, and very small groups can be distinguished, but not identified. Some three hundred and fifty manuscripts still survive from Tours (i.e. basically from St. Martin's), over three hundred from St Gall, rough three hundred from Rheims (which which several scriptoria were involved) roughly two hundred from Corbie, over one hundred from Lorsch, Salzburg, Lyons, and Freising. Not only does Tours surprass the others in numbers but a full forty-five of the traceable codices are or were full one volume bibles (pandects) of 420-450 leaves, with a format of c. 55 x 40cm, written in two columns of fifty to fifty-two lines. Between the last years of Alcuin (for whom Northumbrian bibles probably provided the model) and 850, St Martin's produced two such bibles every year for the Carolingians, for episcopal churches, and for monasteries. These large-format bibles were imitated in other places, for example in Freising, and in two bibles dedicated to Charles the Bald, the Franco-Saxon: Paris, BN, Lat. 2, and the Bible of San Paolo fuori le mura, in Rome" (Bischoff, Latin Palaeography: Antiquity and the Middle Ages [1990] 208).