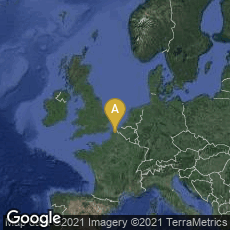 Liber Floridus, a Medieval Encyclopedia, of which the Autograph Manuscript Survived 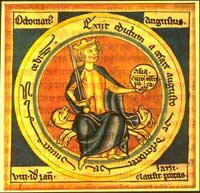 Between 1090 and 1125 Lambert, Canon of Saint-Omer, France, compiled the Liber Floridus, a kind of illustrated encyclopedia of Biblical, chronological, astronomical, geographical, cartographic, theological, philosophical and natural history compiled from 192 different works. Lambert's Liber floridus was the first of the encyclopedias of the High Middle Ages that slowly superseded the work of Isidore of Seville. The original autograph manuscript, completed in 1120 and dedicated to Saint Omer (St. Audomar) by Canon Lambert, is preserved in Ghent University Library, though its latter portion did not survive. In February 2014 Ghent University Library provided an unusually detailed, well documented, website for the manuscript, and a digital facsimile at this link.

Liber floridus includes various maps including a mappa mundi. The Ghent manuscript, the oldest of the known copies, includes a map of parts of Europe and two climate-zone drawings based on the Macrobian model as an attempt to make a complete world map. The parts of the European map sketch show interesting and odd representations.

"In this treatise Lambert compiled a chronicle or history that reaches to the year 1119; it contains various maps, including a mappamundi, which originally like the text, has a date at least earlier than 1125, and has survived in three forms: in the manuscripts of Ghent, Wolfenbüttel, and Paris. In spite of a clearly expressed intention of supplying a complete world map, the oldest copy, the Ghent manuscript, only includes Europe, two Macrobian-zone sketches and a T-O design. This particular manuscript copy seems to have been written by Lambert himself, certainly not later than 1125, and contains some remarkable peculiarities with regards to Europe. The Wolfenbüttel and Paris copies, dating from about 1150, are simply different copies from the same original, which was doubtless of Lambert's own draftsmanship (although in a monograph entitled Die Weltkarte des Martianus Capella, R. Uhden has pointed out that the world map contained in the Wolfenbüttel copy carries a legend ascribing the original to Martianus Capella. The correctness of the ascription is further verified by the identity of various other legends on the map with passages in the Satyricon or De Nuptiis Philologiae et Mercurii . . . by Martianus Capella). These maps, which are based upon Capella's design, contain an equatorial ocean but are quite different than the Macrobian zone-maps (Slide #201). The ecliptic is usually shown, with the twelve signs of the zodiac, and the generalization of the coastlines is rounded in nature. Most of these maps are characteristically oriented to the East (although some show a northern orientation), and have a large amount of text in the southern continent. The climatic zones may or may not be explicitly shown. Regularly shaped islands are usually found in the ocean surrounding the northern continent.

"While containing a less detailed Europe, both the Wolfenbüttel and Paris manuscripts possess a complete mappamundi, together with a special and interesting addition. Nowhere else in medieval cartography do we find greater prominence assigned to the unknown southern continent - the Australian land of the fabled Antipodes (termed Antichthon by the ancients). On the Paris manuscript, where this land occupies half of the circle of the earth, a long inscription defines this 'region of the south' in terms not unlike those used on the St. Sever - Beatus map (Slide #207D)" (http://www.henry-davis.com/MAPS/EMwebpages/217mono.html, accessed 12-26-2008)