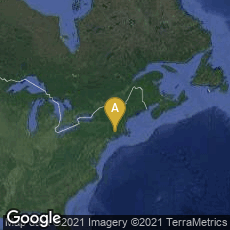 Title page of the first edition of Amelia Simmons' American Cookery (lacking the last two letters in the title). Library of Congress.

In 1796 Amelia Simmons, characterizing herself on the title page as “An American Orphan,” published in Hartford, Connecticut, American Cooke, or the Art of Dressing Viands, Fish, Poultry and Vegetables, and the Best Modes of Making Pastes, Puffs, Pies, Tarts, Puddings, Custards and Preserves, and All Kinds of Cakes, from the Imperial Plumb to Plain Cake, Adapted to this Country, and All Grades of Life.

This was the first cookbook written by an American published in the United States. “Numerous recipes that adapt traditional dishes by substituting native American ingredients such as corn meal and squash are printed here for the first time, including 'Indian Slapjack,' 'Johny Cake,' and 'Squash Pudding.' Simmons's 'Pompkin Pudding,' baked in a crust, is the basis for the classic American pumpkin pie. Although this popular work was published in many editions, only four copies of the original edition are known to have survived” (American Treasures of the Library of Congress, accessed 12-29-2008).