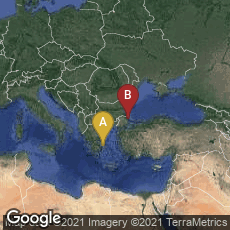 A: Athina, Greece, B: Kırklareli, Turkey In his Anabasis, describing events that occurred between 401 and 399 BCE, Greek historian and soldier Xenophon reported in Book Seven, Part V, line 14, that books (papyrus rolls) formed part of the cargo of ships wrecked off Salmydessus on the north coast of Thrace. This is evidence that books were exported from Athens (?) to the Euxine coast by this date, reflective of an international book trade.