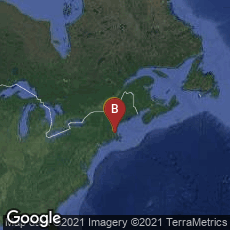 In 1661 English puritan clergyman and missionary in Roxbury, Massachusetts, John Eliot, and printers Samuel Green and Marmaduke Johnson in Cambridge, Massachusetts issued the first complete edition of the Bible (Old and New Testaments and the metrical psalms) published in the Western Hemisphere. Entitled Mamusse Wunneetupanatamwe Up-Biblum God, it was a translation of the Geneva Bible into the Indian Massachusett language , an Algonquian language. The book, which came to be known as "Eliot's Indian Bible," was also “the earliest example in history of the translation and printing of the entire Bible in a new language as a means of evangelization” (Darlow and Moule). Publication was the result of a project that took more than ten years. On July 27, 1649, the British Parliament enacted an "Ordinance for the Advancement of Civilization and Christianity Among the Indians." This act created The Society for the Propagation of the Gospel in New England, the first Protestant missionary society. Also in 1649 Eliot made the decision to attempt the translation of the Scriptures into the Algonquin language. Like other native American languages, Alogonquin had no written form, and it was considered one of the world's most difficult languages. The process of translation of the bible into the Natick dialect of the region's Algonquin tribes took Eliot ten years, with the assistance of John Sassamon, a member of the local tribe, whose ability to speak and write English proved invaluable.

“When the manuscript was ready for publication, the Society for the Propagation of the Gospel in New England not only provided the funds to print it, but they also sent an English printer by the name of Marmaduke Johnson, a printing press, and a supply of paper. Johnson arrived in the New World and set to work with Samuel Green who had already started to print the New Testament. By 1661 they had completed the printing of fifteen hundred copies of the New Testament. One thousand of the New Testaments were reserved for binding with the Old Testament, when completed, to form an entire Bible. The remaining copies of the New Testament were distributed among the Algonquin tribe or sent to England as presentation copies.