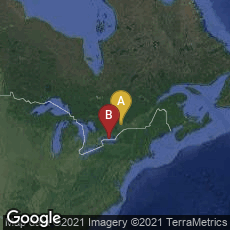 British and Canadians Invent the Trackball Prototype (circa 1951) of trackball used in the successful 1953 sea trials of DATAR. The ball floated on air-suspension. This is probably the earliest known Trackball.

In 1946 English engineer Ralph Benjamin invented the first trackball called roller ball, which was patented in 1947.[1]