Portrait of Otto III in the Gospels of Otto III, Bayerische Staatsbibliothek CLM 4453. 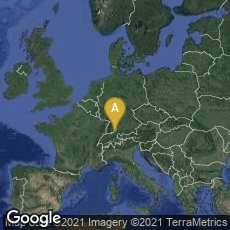 The Gospels of Otto III, Possibly the Most Valuable Book in the World Upper cover of the treasure binding on the Gospels of Otto III. Bayerische Staatsbibliothek Clm 4453.

"must be a candidate for the most valuable book in the world. It was made for Otto around 998 . . . .  It is in its original golden binding set with jewels and with a Byzantine ivory panel. It is a totally imperial manuscript with full-page illuminated initals, Evangelist portraits, twenty-nine full-page miniatures from the life of Christ, and dominating all these, it has a pair of facing paintings showing the peoples of the world adoring Otto III. The worshippers resemble the Magi bringing offerings to the infant Christ. They are four women bearing gold and jewels and their names are written above in capitals: Sclavinia, the eastern European with dark read hair; Germania, a fair-skinned girl with long wispy blonde hair, Gallia, the back-haired French girl, and the curly-headed Roma, who is bowing lowest of all before the ruler of the empire. Otto himself is shown the opposite page, seated disdainfully on his majestic throne, flanked by two priests with books. . . . Otto III had built himself a palace on the Aventine Hill in Rome. His library including (amazingly) a fifth-century manuscript of Livy's history of Rome, probably given to him by the archbishop of Piacenza in about 996; the transcript of it that he had made still survives in Bamberg. His seal had the legend 'Renovatio Imperii Romanorum', the restoration of the empire of the Romans. He thought himself at least as great as Caesar Augustus" (de Hamel, A History of Illuminated Manuscripts [1986] 67-68).

The Gospels of Otto III is preserved at Munich in the Bayerische Staatsbibliothek (Clm 4453).