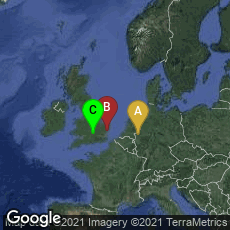 Probably to outwit restrictions on the importation of foreign books into England, the imprint of Bale's book reads "Ipswich: John Overton" even though the book was printed in Wesel, Germany, by Derick van der Straten.

While in religious exile in Germany in 1548 John Bale, English churchman, historian, and controversialist, published Illustrium maioris Britanniae scriptorum hoc est, Angliae, Cambriae, ac Scotiae Summarium... ("A Summary of the Famous Writers of Great Britain, that is, of England, Wales and Scotland"). This was the first national bibliography, the first bibliography of British authors, and the first British literary biographical work.

"This chronological catalogue of British authors and their works was partly founded on the Collectanea and Commentarii of John Leland. Bale was an indefatigable collector and worker, and personally examined many of the valuable libraries of the Augustinian and Carmelite houses before their dissolution. His work contains much information that would otherwise have been hopelessly lost. His autograph note-book is preserved in the Selden Collection of the Bodleian Library, Oxford. It contains the materials collected for his two published catalogues arranged alphabetically, without enlargement on them nor the personal remarks which colour the completed work. He includes the sources for his information. He noted:

'I have bene also at Norwyche, our second citye of name, and there all the library monuments are turned to the use of their grossers, candelmakers, sopesellers, and other worldly occupyers... As much have I saved there and in certen other places in Northfolke and Southfolke concerning the authors names and titles of their workes, as I could, and as much wold I have done through out the whole realm, yf I had been able to have borne the charges, as I am not' " (Wikipedia article on John Bale, accessed 01-04-2009).

Probably to outwit restrictions on the importation of foreign books into England, the imprint of Bale's book reads "Ipswich: John Overton" even though the book was printed in Wesel, Germany, by Derick van der Straten. Nevertheless, the paper, typographic style, and woodcut on the title page are all rather obviously Germanic, and one wonders whether the attempt at deception stood a chance.

Book History from 1452 to 1797
Bibliography
Survival of Information / Philology