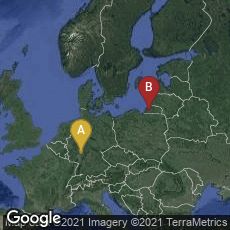 A: Innenstadt I, Frankfurt am Main, Hessen, Germany, B: Kaliningrad, Kaliningradskaya oblast', Russia In 1678 philologist and bibliographer Johann Hallervord published the first bibliography of rare books issued with the book collector in mind: Bibliotheca curiosa in qua plurimi rarissimi atque paucis cogniti scriptores in Königsberg and Frankfurt. Hallervord (1644-1676) mentioned more than 2800 authors, and included information on anonymous and pseudonymous works. As the son of a bookseller, and probably a scion of the Hallervord family of publishers in Stettin, Hallervord had access to important  public and private libraries in Königsberg and in the Baltic regions, on which he was able to base his research.