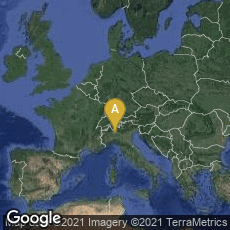 Pair of western metalwork bookcovers presented by the Lombard queen Theodelinda to the Basilica of St. John the Baptist in Monza.

"The earliest western metalwork bookcovers (though their origin has been disputed) are the pair presented by the Lombard queen Theodolinda (d. 625) to the Basilica of St. John the Baptist in Monza. The covers again are identical, each bearing a gem-encrusted cross over a gold background, surrounded by a frame of red glass cloissonné.

"As with the Syrian and Byzantine silver covers, it is not known what codex Theodelinda's covers might have contained. Not until Carolingian times can the covers of treasure bindings be connected to the original codices, and even then clear-cut examples are few" (Needham, Twelve Centuries of Bookbindings 400-1600 [1979] 22).