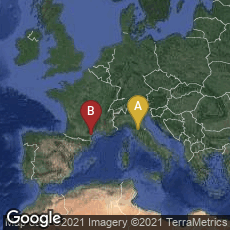 Celsus's De Medicina, the Oldest Western Medical Document after the Hippocratic Writings, and How it Survived the Middle Ages De medicina remains the oldest medical document written after the Hippocratic writings, the earliest surviving major medical treatise written in Latin, and the earliest Western history of medicine. It is the only extant work of Roman encyclopedist and presumed physician Aulus Cornelius Celsus, who lived from c. 25 BCE to c. 50 CE, probably in Gallia Narbonensis, a Roman province located in what is now Languedoc and Provence, in southern France, also known as Gallia Transalpina (Transalpine Gaul).

Celsus's De medicina remains the most important source of our knowledge of medicine in the Roman empire. It was originally part of a larger encyclopedic work by Celsus covering agriculture, military science, rhetoric, government, law, philosophy and medicine, but only the eight books on medicine survived intact. The text of De medicina was lost sometime during the Middle Ages and rediscovered during 1426-27.

The earliest extant manuscripts of De medicina are :

(1) F, Codex Florent., Laurentian Library, 73, 1. IX century and in parts defective.  A digital facsimile of this manuscript is available from the Digital Repository of the Biblioteca Medicea Laurenziana at this link.

“(P) was written by ‘sacer Johannes’, probably Johannes Philagathus (abbot of Nonantola from 982, later bishop of Piacenza, and in 997-8 Antipope John XVI), who taught Gerbert’s master Otto III; and Florence, Laur. 73.1 (f, s.IX) proclaims itself ‘liber monasterii Sanct Ambrosii Mediolanensis, where Simon [Cordo] of Genoa [physician to Pope Nicholas IV] could have seen it. P, which in s.XV belonged to St. Hilary Poitiers, was copied from the other medieval manuscript, Vatican lat. 5951 (V, s. IX, northern Italy), before it lost a gathering and the last leaf.

“F came to light in 1427, and V too was copied in s.XV; but most of the fifteenth-century manuscripts, which number more than twenty, owe the staple of their text to a lost manuscript (S) first heard of at Siena in 1426, when Panormita described its appearance as ‘prae vetustate venerabilis’. S had leaves missing when Niccoli copied from it, before the end of 1427, Florence, Laur. 73.7 (J); in 1431 he filled from F as many of the gaps as he could” (Reynolds, Texts and Transmission [1983] 16-17).

De Medicina was first published in print by Nicolaus Laurentii, Alamanus, of Florence in 1478. The text was edited for the press by Bartolomeo Fonzio from Florence, Laurentian 73.4, which his brother Niccolò wrote, and which Bartholomeo Fonzio corrected from F. (ISTC No. ic00364000.) In February 2014 a digital facsimile of the first printed edition was available from the Bayerische Staatsbibliothek at this link.

While there has been much debate as to whether Celsus was truly a “physician” (a term that in ancient times referred to someone who practiced medicine for money), it is clear from the text of De medicina that he had considerable first-hand medical expertise.

“From his writing we may conclude that his professional skills were excellent and that his knowledge of medicine was exhaustive. He was also endowed with superior literary skills. . . . His contributions to medicine are major: he wrote the first major medical treatise in Latin; he created, almost single-handedly, scientific Latin; and he wrote the first systematic review of all that was known in medicine up to his time” (Prioreschi, A History of Medicine III, 210-11).

Book I of De medicina contains a historical overview of medicine; Book II deals with the course and general treatment of diseases; Books III and IV with special therapy; Books V and VI with pharmacology (drugs and medication); Book VII with surgery; and Book VIII with bone diseases. Celsus is credited with recording the cardinal signs of inflammation: calor (warmth), dolor (pain), tumor (swelling) and rubor (redness and hyperaemia). He goes into great detail regarding the preparation of numerous ancient medicinal remedies including the preparation of opioids. In addition, he describes many first-century Roman surgical procedures which included removal of a cataract, treatment for bladder stones, and the setting of fractures.

In compiling De medicina Celsus drew heavily upon the Hippocratic corpus, referencing some 80 Greek medical writers, some of whom are now known only from Celsus’s work. He translated Greek medical terms into Latin, and many of these Latin terms have remained standard in medicine to the present day. Included among these terms is the word “cancer” (Latin for the Greek karkinos [crab]), which Celsus used to describe various types of non-malignant ulceration such as erysipelas and gangrene. In discussing malignant disease Celsus used the words carcinoma and carcinode, terms derived directly from the Greek.

When De medicina was translated into English by James Grieve in 1756 it became the first of the major medical treatises from the ancient world to appear in English.