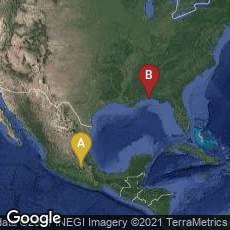 The First Map of All of New Spain Map of the area around Mexico City, centered on the large Lagune de Mexico and extending to the surrounding mountains, rivers, towns and villages, published by Italian traveler Giovanni Francesco Gemelli Careri who reportedly based the map on a copy an original native map while Careri was in Mexico. The map is drawn on a partial bird's-eye format, with an imaginary horizon that includes an erupting volcano at upper right. Many villages are located, including Pachuca, Tacoma, Atlapilco, Tolodyuca, Tetlapanaloya, and Apazco. Careri's account states that the map is a copy of a map drawn by Carlos Siguenza from an original drawn by native Mexicans. The Mexicans were told to search for a place that would be shown to them by the presence of an eagle standing on a cactus growing out of a rock. This place is Tenochtitlán or present-day Mexico City.

Between 1691 and 1694 polymath Carlos de Sigüenza y Gongóra prepared the first-ever map of all of New Spain.

"He also drew hydrologic maps of the Valley of Mexico. In 1692 King Charles II named him official geographer for the colony. As royal geographer, he participated in the 1692 expedition to Pensacola Bay, Florida under command of Andrés de Pez, to seek out defensible frontiers against French encroachment. He mapped Pensacola Bay and the mouth of the Mississippi: in 1693, he described the terrain in Descripción del seno de Santa María de Galve, alias Panzacola, de la Mobila y del Río Misisipi" (Wikipedia article on Carlos de Sigüenza y Gongóra, accessed 01-10-2009).