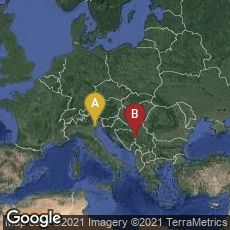 Medieval Mappa Mundi, Stolen during an Auction, and then Lost The De Virga world map, including calendars, from an old photograph before the map disappeared

The map was "discovered" in a second-hand bookshop in 1911 in Srebrenica, Bosnia by Albert Figdor, a map collector, and it was analysed by Franz Von Weiser of the Austrian State University in Vienna. Authenticated photographs were taken at the time, which are preserved in the British Library. Regrettably the original map was stolen during an auction in 1932, and has never been recovered.  It may have been a source for the Venetian Fra Mauro map (circa 1450), with which it is generally consistent.

"The map is oriented to the North, with a wind rose centered in Central Asia, possibly the observatory of astronomer, mathematician and sultan, Ulugh Begh, in the Mongol city of Samarkand in Uzbekistan, or the western shore of the Caspian sea. The wind rose divides the map in eight sectors.

"The extension shows a calendar with depictions of the signs of the zodiac and a table to calculate lunar positions"  (Wikipedia article on De Virga world map, accessed 01-12-2009).