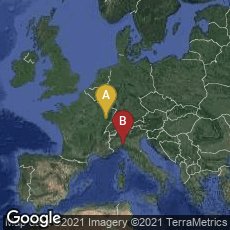 "Although few ages are so dark that they are not penetrated by a few shafts of light, the period from roughly 550 to 750 was one of almost unrelieved gloom for the Latin classics on the continent; they virtually ceased being copied. Among the mass of patristical, biblical, and liturgical manuscripts that survive from this period there are precious few texts of classical authors; from the the sixth century we have scraps of two Juvenal manuscripts, remnants of one of the Elder and one of the Younger Pliny, but at least two of these belong to the early part of the century; from the seventh century we have a fragment of Lucan; from the early eighth century nothing.

"The fate that often overtook the handsome books of antiquity is dismally illustrated by the surviving palimpsests—manuscripts in which the original texts have been washed off to make way for works which at the time were in greater demand. Many texts that had escaped destruction in the crumbling empire of the West perished within the walls of the monastery; some of them may have been too tattered when they arrived to be of practical use, and there was no respect for rags, however venerable. The peak period for this operation was the seventh and early eighth centuries, and although palimpsests survive from many centres, the bulk of them have come from the Irish foundations of Luxeuil and Bobbio. Texts perished, not because pagan authors were under attack, but because no one was interested in reading them, and parchment was too precious to carry an obsolete text; Christian works, heretical or superfluous, also went to the wall, while the ancient grammarians, of particular interest to the Irish, often have the upper hand. But the toll of classical authors was very heavy; amongst those palimpsested we find Plautus and Terence, Cicero and Livy, the Elder and Young Pliny, Sallust and Seneca, Vergil and Ovid, Lucan, Juvenal and Persius, Gellius and Fronto. Fronto survives in three palimpsests, fated always to be the underdog. Among the texts that have survived solely in this mutilated form are some of outstanding interest such as the De republica of Cicero (Vat. lat 5757... ) written in uncials of the fourth or fifth century and covered at Bobbio in the seventh with Augustine on the Psalms, a fifth-century copy of De amicitia and De vita patris of Seneca (Vat. Pal. lat. 24) which succumbed in the late sixth or early seventh century to the Old Testament, and a fifth-century codex of Sallust's Historia (Orléans 192 + Vat. Reg. lat. 12838 + Berlin lat. 4º 364) which, in France and probably at Fleury, was supplanted at the turn of the seventh century by Jerome. Other important palimpsests are the Ambrosian Plautus (Ambros. S.P. 9/13-20), olim G. 82 sup.) and the Verona Livy (Verona XL (38)), both of the fifth century" (Reynolds & Wilson, Scribes and Scholars 3rd ed [1991] 85-86).