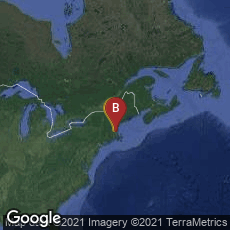 Henry David Thoreau's "In Wildness is the Preservation of the World." Portrait photograph from a ninth-plate daguerreotype of Henry David Thoreau, June 18,1856. "Calvin R. Greene was a Thoreau “disciple” who lived in Rochester, Michigan, and who first began corresponding with Thoreau in January 1856. When Greene asked for a photographic image of the author, Thoreau initially replied: “You may rely on it that you have the best of me in my books, and that I am not worth seeing personally – the stuttering, blundering, clodhopper that I am.” Yet Greene repeated his request and sent money for the sitting. Thoreau must have kept this commitment to his fan in the back of his mind for the next several months. On June 18, 1856, during a trip to Worcester, Massachusetts, Henry Thoreau visited the Daguerrean Palace of Benjamin D. Maxham at 16 Harrington Corner and had three daguerreotypes taken for fifty cents each. He gave two of the prints to his Worcester friends and hosts, H.G.O. Blake and Theophilius Brown. The third he sent to Calvin Greene in Michigan. “While in Worcester this week I obtained the accompanying daguerreotype – which my friends think is pretty good – though better looking than I,” Thoreau wrote.

In 1851 American author, naturalist, transcendentalist, tax resister, development critic, abolitionist, surveyor, and philosopher Henry David Thoreau delivered an address to the Concord, Massachusetts Lyceum declaring that "in Wildness is the preservation of the World." In 1863 this address was published posthumously in Boston as the essay "Walking" in Thoreau's Excursions.

Thoreau second major contribution to the environmental movement was an address he delivered to the Middlesex (Massachusetts) Agricultural Society in 1860 entitled "The Succession of Forest Trees." In this speech Thoreau analyzed aspects of what later came to be understood as forest ecology and urged farmers to plant trees in natural patterns of succession. The address was also published in Excursions, becoming perhaps Thoreau's most influential ecological contribution to conservationist thought.