Muhammad with veiled face and halo. 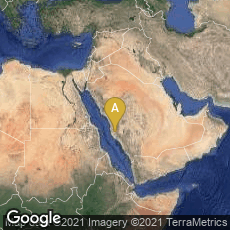 The Death of Muhammad

The death of Muhammad occurred in 632.

"Muhammad, according to tradition, could neither read nor write, but would simply recite what was revealed to him for his companions to write down and memorize. Adherents to Islam hold that the wording of the Qur'anic text available today corresponds exactly to that revealed to Muhammad himself: words of God delivered to Muhammad through Jibtril (Gabriel).

"According to some Muslim traditions, the companions of Muhammad began recording suras in writing before Muhammad died in 632; written copies of various suras during his lifetime are frequently alluded to in the traditions. . . . At Medina, about sixty-five companions are said to have acted as scribes for him at one time or another; the prophet would regularly call upon them to write down revelations immediately after they came."