Detail from title page of the Dell'anotomia [sic], et dell'infirmita del cavallo.  Click on link below to view and resize full image. 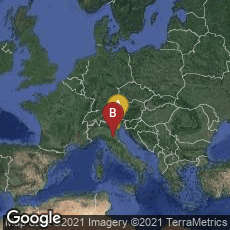 Detail of head of horse from page of the Dell'anotomia [sic], et dell'infirmita del cavallo.  Click on link below to view and resize full image.

Ruini's work, was the first book devoted exclusively to the structure of an animal other than man. Following the example of Vesalius, Ruini stressed the importance of "artful instruction" about all parts of the horse's body, the diseases that afflict them, and their cures. The first part of his work gives an exhaustive treatment of equine anatomy, with especially good accounts of the sense organs; it is illustrated with sixty-four full-page woodcuts, of which the last three, showing a stripped horse in a landscape setting, were clearly inspired by the Vesalian "musclemen" plates.

The second part of the work deals with equine diseases and their cures from a traditional Hippocratic-Galenic standpoint. Some scholars, basing their arguments on Ruini's description of the horse's heart and blood vessels, believe that Ruini was active in the discovery of the greater and lesser circulatory systems. This is unlikely, but it is probable that he was one of many at that time who had a notion of the circulation of the blood.

Ruini's work appeared shortly after his death. The unusual rarity of the first edition might be partially explained by fact that a portion of the sheets of the first edition were reissued the following year by printer Gaspare Bindoni in Venice. Copies of this second issue, which is also rare, contain a cancel title and a different dedication leaf changing the dedication to César, Duke of Vendôme, natural son of Henry IV.