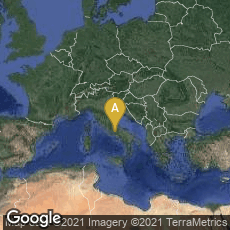 St. Benedict Founds the Abbey at Monte Cassino and Later Formulates his Rule Benedict delivering his Rule to St. Maurus and other monks of his order. Miniature created in France, Monastery of St. Gilles, Nimes, 1129. 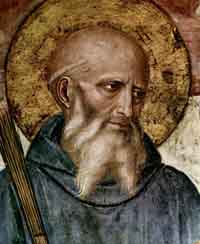 Benedict's Rule, formulated near the end of his life (547), based the foundations of monastic life on prayer, study, and the assistance of the sick. Benedict's rule was influenced by the rule of John Cassian who founded the first monasteries in Europe near Marseille, southern Gaul, about 415 CE.

♦ "Every monastery, therefore, was obliged to have a doctor to attend patients and a separate place in the cloister where the sick could be treated. It thus became necessary for one, at least, of the monks to collect scientific material, to study it and to hand on his knowledge to those who would, in time, take his place. In this way was started that practical teaching which was transmitted by word of mouth from generation to generation to the great advantage of the sick breathren of the monastery. As many codices of Latin and Greek learning as could be found were collected, and translations and extracts made for the use of those who, either because their studies had been only elementary or because they lacked the time,  were incapable of reading their authors in the original text.

"What was the position of the monkish doctor in these religious colonies? It is true that in Benedictine monasteries the doctor was not granted a well-defined position by the monastic rule, like the Prior, the nurse (a man, of course—with a post which was merely administrative), the chaplain, the cellarer or the librarian. The title of medicus was, therefore, not official; its holder had no disciplinary power, and it could not directly procure him any privileges. It was a mere name given to monks who, as a result of their studies, showed some special capacity for the art of healing. But, without having any official status among the dignitaries of the monastery, they yet had a high moral position in the community. In official monastic documents they signed after those monks who were invested with the highest monastic rank. Their elevated moral position is quite clear from the important missions entrusted to thrm by great personages of the day, missions of trust which would not have been given to individuals who were not held in considerable esteem. . . .

"The doctor treated his patients, prescribed the medicaments and prepared them himself, using those which he kept in the armarium pigmentorum. The herb garden, which existed in every monastery, allowed him to have at hand the medicinal plants he needed. The students whom he gathered round him in the monastery helped him to treat the patients and prepared the medicines. The work was done in the Infirmary, a place varying in size with the importance of the monastery, and set apart from the dormitory and the refectory of the monks themselves. Into the Infirmary were taken not only sick monks but also gentlemen, townspeople, and even labourers who applied for admission. The monastic doctor, besides his practice, had also to undertake the copying of medical texts. . . . In each great Benedictine monastery a real studium was formed, from which doctors were sent to the minor centres. The work of the doctor, however, was not limited by the monastery walls. At that time, when civilian medicine was generally represented by bone-setters and travelling quacks, the services of the monastery doctor were asked of the Prior whenever a person of importance or a member of his family fell ill in the neighbourhood. Permission was given freely and lasted during the whole treatment. The monastic doctor was never sent away on duty unless accompanied by another monk or by one of his pupils. Owing to his vow of poverty, he himself could receive no reward for his services, but splendid donations in lands, money or kind were made by great lords who willingly gave such gifts pro recuperata valetudine" (Capparoni, "Magistri Salernitani Nondum Cogniti". A Contribution to the History of the Medical School of Salerno [1923] 3-5).

"Idleness is the enemy of the soul; hence brethren ought, at certain seasons, to occupy themselves with manual labour, and again at certain hours, with holy reading. . . .

"Between Easter and the calends of October let them apply themselves to reading from the fourth hour till near the sixth hour.

"From the calends of October to the beginning of Lent let them apply themselves to reading until the second hour. . . . During Lent, let them apply themselves to reading from morning until the end of the third hour. . . and, in these days of Lent, let them receive a book apiece from the library, and read it straight through. These books are to be given out at the beginning of Lent" (Clark, The Care of Books [1902] 56).

Benedict's Rule mentioned a library without mentioning the scriptorium that would later become an integral part of monastic life.

♦ Benedictine scriptoria, where the copying of texts not only provided materials needed in the routines of the community and served as work for hands and minds otherwise idle, also produced a desirable product that could be sold. Early commentaries on the Benedictine rule suggest that manuscript copying was a common occupation of at least some Benedictine communities. Montalembert drew attention to the 6th-century rule of St Ferreol that regarded transcription as the equivalent of manual labor since it charges that the monk "who does not turn up the earth with the plow ought to write the parchment with his fingers" (Wikipedia article on Scriptorium, accessed 02-22-2009).

"Benedictine scriptoria, and with them libraries, became active not in the time of St. Benedict himself, but under the impulse of Irish (and later English) monks on the continent in the seventh and eighth centuries. The influence of the Anglo-Saxon missionaries, principally the Wessex-born Boniface and his allies and helpers, was especially strong in Germany, leading to the foundation of episcopal centers such as Mainz and Würzburg, and of monasteries that were to become famous for their libraries such as Fulda (744) and Hersfeld (770). The Anglo-Saxons brought with them a script and books from the well-stocked English libraries. In the course of time the preparation (and even sale) as well as consumption of books became a characteristic aspect of continental monastic life and the library a central part of the monastery" (M. Davies, "Medieval Libraries" in Stam (ed) The International Dictionary of Library History I [2001] 105).

•The image is a portrait of Benedict  from a fresco in the cloister of San Marco in Florence.