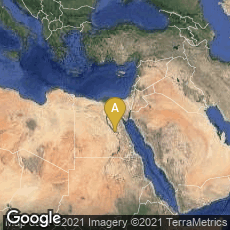 The Earliest-Known Coptic Miniature, and the Earliest Evidence for Tooling on a Leather Bookbinding An illuminated manuscript on vellum of the first half of the Acts of the Apostles (MS G. 67) written in Greek uncial with some Coptic characters of the Middle Egyptian Oxyrynchite dialect around the year 450, is preserved in the Morgan Library and Museum.

"There is a miniature in the final quire of a crux ansata flanked by two peacocks and bearing three smaller birds. It is the earliest-known Coptic miniature. The place of discovery of this Coptic Acts has never been revealed, but it appeared in the antiquarian book trade in 1961 together with a Coptic Gospel of Matthew that must have belonged to the same find. This latter is now in the possession of William Scheide. Its script is very similar to that of the Glazier Acts, its dialect is the same, and the leaf size of both manuscripts is very nearly identical. Their small format suggests that they were made for private use. The Glazier Acts was originally dated as early as the fourth century, but recently a more generalized dating in the fifth century has been argued.

"The binding of the Scheide Matthew is now quite damaged, with loss of the entire spine or backstrip, but was identifical in type to that of the Glazier Acts. Apart from its boards, all that now remains are carbonized portions of the hinging strips. At least two other Coptic codices, also dated to the fifth century, still retain bindings of this type. One of them is in the Morgan Library, M. 910: a complete Coptic Acts, in the Sahidic dialect. Though severely damaged and partly distingetrated, from what remains the system of wooden boards, backstrip, hinge strips (four), and wrapping strips can be clearly reconstructed. The other example, a Sahidic Mark and Luke, is in the Palau-Ribes collection of the University of Barcelona.

"The fine state of preservation of the Glazier Acts binding, and especially of the goatskin backstrip is so fresh as to have cast some suspicion on its authenticity. However, considering the even more ancient Nag Hammadi find, it should not be assumed a priori that the binding is too good to be true, and that leather could not survive and remain flexible for so long. There have been various losses; the backstrip once extended at both ends, so that it could be folded over the top and bottom edges of the leaves for additional protection. The top extension is now frayed, and that at the bottom has been torn away. Two of the three wrapping strips survive, one only partially; and two of the bone securing pegs terminating the strips. Neither strip is now attached to the board. There are only remains of what were originally two plaited leather place marks, once laced into the upper board, one into the lower. In addition to fillets, the backstrip was stamped with a small tool of concentric circles, a common Coptic decorative pattern repeated on the bone pegs. This is the earliest evidence for tooling on a leather bookbinding.

"Three Egyptian bindings dated to the sixth century have survived in bindings which appear to exhibit later, fancier evolutions of this style; two are in the Chester Beatty Library, Dublin, and one in the Freer Gallery, Washington. The techniques of these bindings have not been entirely deciphered, but in all three examples, the number of hinging holes on the boards was greatly increased, to three dozen or more. In none of the three are there any signs of linkage between sewing and covers--with with the Glazier Acts and others of its group, only glue held the covers to the codex. The backstrips of the two Chester Beatty bndings were stamped with pictorial tools. The wooden covers of the Freer Gospels (a Greek text, but of Egyptian origin) are painted with portraits of the evangelists, two on each cover. It is generally thought that these painted figures were added later, perhaps in the seventh century, and were not part of the orignial conception of the binding. The evangelists are depicted holding codices, a traditional iconography, and it is curious to note that these are quite clearly represented as possessing jewelled covers. . . . "(Needham, Twelve Centuries of Bookbinding: 400-1600 [1979] 9-10).

In 2019 when I reviewed this database entry that I originally wrote roughly ten years earlier I could not find a photograph of the binding of Morgan MS G. 67 posted on the Morgan Library & Museum website, though they posted thumbnail photographs of a wide variety of other early Coptic bookbindings.

What I did find when I searched the web in July 2019 was a "facsimile of the binding on the Glazier Codex based on the original from the 5th century AD, now in the Morgan Library and Museum (MS G. 67)", from the Exhibition, The Codex and Crafts of Late Antiquity. Screen shots of that facsimile are posted with this entry.