The original ivory covers for the Dagulf Psalter, which were separated from the codex and are preserved in the Louvre. The psalter was created for Pope Adrian 1, at the order of Charlemagne. In the upper panel on the left King David orders the writing of the psalms, andin the lower panel sings them. In the upper panel on the left Jerome receives the order to write the psalter; in the lower panel he dictates the psalter. 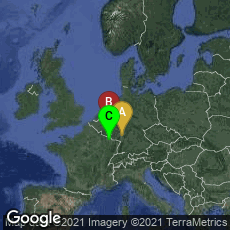 The Dagulf Psalter, the First Treasure Binding Associated with its Original Codex 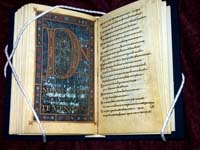 The Dagulf Psalter, sometimes also called The Golden Psalter because it was written entirely in golden Carolingean script, is a collection of the 150 Psalms presented by Charlemagne to Pope Adrian I. The main part of the writing was done by the scribe Dagulf who signed the book in a dedication poem to Charlemagne. The work covers two decisive phases of the Carolingian School of painting; the section carried out between 783 and 789 may have been produced in Worms and Metz, while the work was completed in Aachen between 790 and 795.

The treasure binding covers of the manuscript are preserved in the Louvre, Paris. The codex itself is preserved in Vienna at Austrian National Library, Cod. 1861.

"Not until Carolingian times can the covers of treasure bindings be connected to their original codices, and even then clear-cut examples are few. The earliest would seem to be the ivory covers of the Dagulf Psalter, presented by Charlemagne to Pope Hadrian I (772-95); although covers and text are now separate, Dagulf's dedicatory verses make explicit mention of the cover decoration. This separation of covers and codex is more the rule than the exception. Rare in any case is the book written before the fifteenth century that has not been rebound. Jewelled covers are particularly susceptible to migration from one codex to another, because they are not integral to the bookbinding. Unlike leather covers, they were tacked on the wooden boards in an operation completely separate form the binding process proper; nor would the artisans who made them be bookbinders. Jewelled covers might easily be removed and added to another codex without any necessity for disbinding or rebinding.

"The expression 'treasure bindings' has a reference broader than just to the materials used in their manufacture. In Jerome's day, when the monastic movement was young and disorganized, jewelled bindings may have been owned by private indviduals. But later they almost invariably belonged to monasteries, cathedrals, and other collegial institutions. Within these institutions they played a specific role; they were part of the liturgical equipment used in celebrating the divine service. This equipment, including crucifixes, eucharistic vessels, vestments, reliquaries, the altar itself, was often of the highest luxury and constituted the 'treasure' of a church. Thus, both finds of sixth-century silver covers referred to above were excavated together with other silverwork liturgical articles. Jewelled covers were ordinarily made for service books, particularly Gospels and Evangeliaries, and may be considered as part of the altar fittings. Because of their special function, they would not be stored in the library presses or library room of their foundations, in or near the cloister. They would be kept quite separate, with the other liturgical objects, convenient to the altar or within the altar itself, under the care of the sacristan" (Needham, Twelve Centuries of Bookbindings 400-1600 [1979] 22-23).