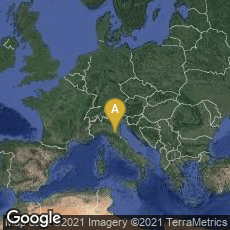 Berengario was the first anatomist to publish illustrated treatises on anatomy based on his own dissections. His Commentaria on the fourteenth-century Anatomia of Mondino was the first work since the time of Galen to display any considerable amount of original anatomical information based upon personal investigation and observation. The woodcut illustrations of muscle men posed before a landscape background in this work, while crude and lacking in detail in comparison to those in Vesalius's Fabrica (1543), represent the model on which Vesalius based his series of larger and more scientifically portrayed muscle men, and the title page of Berengario's work, with its small illustration of a dissection scene in the lower margin, may have suggested to Vesalius the idea for the dramatic and famous frontispiece to the Fabrica. Vesalius also borrowed from Berengario the concept of having particular anatomical figures perform specific actions, and repeated Berengario's trick of showing a skeleton holding a skull in each hand as a means of illustrating three separate views of the skull in one woodcut.

An art collector and patron who, according to Vasari, once accepted a Raphael painting of St. John in the Desert as a fee for medical attendance, it is probable that Berengario saw some of Leonardo da Vinci's anatomical drawings, as Leonardo’s artistic techniques of depicting anatomical parts from different perspectives were incorporated in some of his woodcuts. It is also likely that Berengario would have hired a fine artist to prepare the woodcuts for his books. Some of the woodcuts have been attributed to the Italian Mannerist painter and sculptor Amico Aspertini.

The Commentaria's scientific contributions include the first reference to the vermiform appendix and the first good account of the thymus. Its descriptions of the male and female reproductive organs, the process of reproduction and the fetus were more extensive than any earlier account, and Berengario was the first to call attention to the greater proportional capacity of the female pelvis to the male pelvis.

For the attribution to Aspertini see Cazort, Kornell, Roberts, The Ingenious Machine of Nature: Four Centuries of Art and Anatomy (1996) 38-39. Choulant, History and Bibliography of Anatomic Illustration [1920] 137-139. Hook & Norman, The Haskell F. Norman Library of Science and Medicine (1991) no. 187.