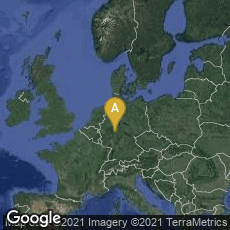 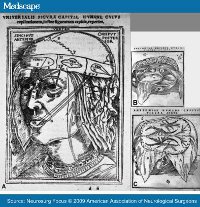 In 1536 German physician, anatomist, mathematician and astronomer Johann Dryander published Anatomia capitis humani. . . . in Marburg. Dryander's work was the first significant book on the anatomy of the head, and one of the earliest anatomical works with illustrations after the author's own dissections. The thin quarto of 14 leaves includes 11 full-page woodcut text illustrations, 5 of which are signed with a monogram consisting of an open pair of compasses (the emblem of the Apostle Thomas) above the letter "G", frequently with the initials "GVB" or "VB" inscribed above. This monogram has been linked to the Basel woodcutter Georg Thomas, and also to the German painter and woodcut engraver Hans Brosamer.

Dryander, who studied anatomy at Paris at the same time as Vesalius, produced in his Anatomia capitis one of the most important pre-Vesalian anatomical studies, showing by means of full-page woodcuts how he learned to dissect and display human anatomy. He was one of the first physicians in Germany to perform public dissections, and the text of Anatomia capitis is the printed record of an anatomical demonstration he gave at Marburg. Anatomia capitis was probably published in a small edition, as Dryander intended it to serve as the preliminary to a full-scale anatomy.

This scheme Dryander partially realized the following year when he issued his Anatomia, hoc est corporis humani dissectionis pars prior. That expanded work included 36 leaves and 19 full-age woodcuts, plus a woodcut title border. Eight of the woodcuts (one of which is repeated) are repetitions of illustrations 1-8 in the 1536 Anatomia, with the illustration numbers removed from the blocks. Another 8 woodcuts (one, Universalis figura capitis humani, repeated) are new to this work; 3 of them are signed with the monogrammed compass device used in the 1536 edition. In addition, there are 3 illustrations made up of images rearranged from illustrations 9, 10 and 11 of the 1536 Anatomia.

Dryander's Anatomiae contained a more extensive anatomy of the human head than his Anatomia capitis and included material on the lungs and heart; it also reprinted the manual for pig dissection, Anatomia porci, traditionally ascribed to Copho (fl. 1110), and excerpts from the Anatomia infantis of Gabriele de Zerbis.

Conrad Gessner Issues the First Universal Bibliography Since the Invention of Printing
Andreas Vesalius Produces a Unprecedented Blend of Scientific Exposition, Art and Typography
Simultaneously with the "Fabrica" Vesalius Issues a Condensation, or Road-Map, of the Encyclopedic Work
Ottavio Ruini Issues the First Book Devoted Exclusively to the Structure of an Animal Other than Man
Giacomo Berengario da Carpi Issues the First Work Since the Time of Galen to Show Original Anatomical Information Based upon Personal Investigation & Observation
Bartholomeo Eustachi Discovers the Eustachian Tubes and Many Other Anatomical Features
Andreas Vesalius Publishes the First Attempt to Formulate Methods of Identification of an Exotic Drug and Methods of Detecting its Adulteration
Who Discovered the Pulmonary Circulation? Servetus, Valverde or Columbo?
Volcher Coiter: One of the First Physicians to Draw the Illustrations for his Own Publications, and Take Credit for Them in Print