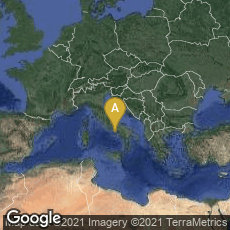 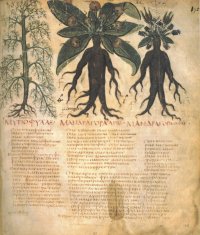 The Naples Dioscorides (Codex neapolitanus Ms. Ex Vindob. Gr. 1 Salerno) preserved in the Biblioteca Nazionale di Napoli, is an early seventh century Greek herbal based on the De Materia Medica of the first-century Greek military physician Dioscorides (Dioscurides) containing descriptions of plants and  their medicinal uses. Until the early 18th century the manuscript was preserved in the Augustine monastery of San Giovanni a Carbonara in Naples. In 1718, the Habsburgs plundered it for the Viennese Court Library.  At the conclusion of the peace negotiations after World War I, in 1919, the codex returned to the Biblioteca Nazionale in Naples.

"Unlike De Materia Medica, the text is arranged alphabetically by plant. The codex derives independently from the same model as the Vienna Dioscurides, composed ca. 512 for a Byzantine princess, but differs from it significantly: though the illustrations follow the same infered model, they are rendered more naturalistically in the Naples Dioscurides. Additionally, in the Naples manuscript, the illustrations occupy the top half of each folio, rather than being full page miniatures as in the Vienna Dioscurides. The plant descriptions are recorded below the illustration in two or three columns. The style of Greek script used in the manuscript indicates that it was probably written in Byzantine-ruled southern Italy, where ancient Greek cultural traditions remained strong, although it is not known exactly where it was produced. Marginal notes indicate that the manuscript had contact with the medical school at Salerno in the fourteenth and fifteenth centuries" (Wikipedia article on Naples Dioscurides, accessed 02-03-2009).