The Leechbook of Bald, One of the Oldest Medical or Scientific Treatises Written in English 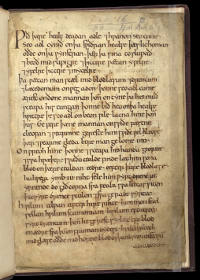 "The Leechbook of Bald is an Old English medical text probably compiled in the ninth-century, possibly under the influence of Alfred the Great's educational reforms. It takes its name from a Latin verse colophon at the end of the second book which begins Bald habet hunc librum Cild quem conscribere iussit, meaning 'Bald owns this book which he ordered Cild to compile.' The text survives in only one manuscript: London, British Library, Royal MS 12, D xvii.

"Both books are organised in a head-to-foot order, but the first book deals with external maladies, the second with internal disorders. Cameron notes that 'This separation of external and internal diseases may be unique in medieval medical texts'. Cameron notes that 'in Bald's Leechbook is the only plastic surgery mentioned in Anglo-Saxon records'. The recipe in particular prescribes surgery for a hare lip, Leechbook i, chapter 13 (pr Cockayne p 56). Cameron also notes that of the Old English Medical compilations 'Leechbook iii reflects most closely the medical practice of the Anglo-Saxons while they were still relatively free of Mediterranean influences,' in contrast to Bald's Leechbook which 'shows a conscious effort to transfer to Anglo-Saxon practice what one physician considered most useful in native and Mediterranean medicine,' and the Lacnunga, which is 'a sort of common place book with no other apparent aim than to record whatever items of medical interest came to the scribe's attention' " (Wikipedia article on Bald's leechbook, accessed 02-03-2009).

"Athough on the fringes of the learned world, Bede and his English monks possessed many of the same medical writings as their contemporaries further South, even if, as Bishop Cyneheard of Worcester put it in 754, the foreign ingredients prescribed therein were unknown or difficult to obtain, even through contacts in Germany or Italy. Anglo-Saxon English, like contemporary Ireland, possessed a written medical literature (from c. 900) in a non-Latin language, but this does not mean that the Anglo-Saxon healer, the laece or leech, was less competent than the medicus. Chants and charms, and explanations of a few diseases as the result of darts hurled by mischievous elves or involving a great worm constitute only a small part of the medicine that survives, and are not unique to the Anglo-Saxons. Similar recipes are found in other regions and in earlier Latin learned texts. Anglo-Saxon knowledge of plant remedies was wide and effective, and authors recognised the problems of identifying Mediterrtanean with British flora. When the otherwise unknown Bald and Cild wrote their Leechbook around 900, perhaps at Winchester, they adapted the best Continental practical medicine to an English environment. Their Leechbook has close parallels with both later Salernitan texts and with fifth-and six-century medical tracts common elsewhere in Western Europe. The simplified some of their Latin recipes by removing some of the more exotic ingredients and added remedies obtained from Ireland or Irish scholars. . . " (Conrad et al, The Western Medical Tradition 800 BC to AD 1800 [1995] 86).

A digital facsimile is available from the British Library at this link.