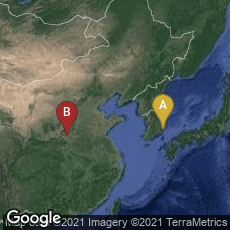 In 1966 researchers found a scroll of paper wrapped in a patch of silk cloth inside the Seokgatap, a Silla dynasty pagoda in a stupa in the Buddhist temple Bulguksa, North Gyeongsang province in Republic of Korea (South Korea). This was a copy of the Buddhist Dharani Sutra called the Pure Light Dharani Sutra (Hanja: 無垢淨光大陀羅尼經 Hangul:무구정광대다라니경; Revised Romanization: Mugujeonggwangdaedaranigyeong).  In Clerks and Craftsmen in China and the West (1970; p. 22 footnote 3) Joseph Needham estimated the date of this sutra as between 684 and 704. However, when the volume on paper and printing in China in Needham's series was published in 1985 Tsien Tsuen-Hsuin revised the date as somewhat later:

"The scroll bears no date, but it includes certain special forms of characters created and used when Empress Wu (r. +680-704) was ruling in China. It is believed that this charm must have been printed no earlier than + 705, when the translation of sutra was finished, and no later than + 751, when the building of the temple and stupa was completed" (Needham, Science and Civilisation in China V, Pt.: Paper and Printing by Tsien Tsuen-Hsuin [1985] 149. The scroll is illustrated as Fig. 1110 on p. 150.)

Research in China by Pan Jixing published in 1997 argued that the printing discovered in Korea was done in China:

"research has shown that the dharani sutra discovered in Korea was translated in China from Sanskrit in 701 and printed in 702 at Luoyang, the capital of China under Wu Zetian, then sent to Korea in several batches" (Wikipedia article History of Printing in East Asia).