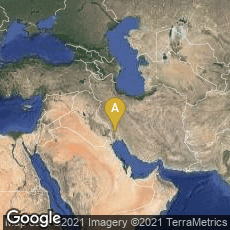 The Code of Hammurabi, Discovered in Khuzestan, Iran by Gustav Jéquier Code on the diorite stele preserved in the Louvre.

The Code of Hammurabi  is the best-preserved ancient law code. It was enacted by the sixth Babylonian king, Hammurabi, and inscribed on stelae displayed in temples around the Babylonian Empire. Of these only one example survives, inscribed on a seven foot, four inch tall basalt stone slab or stele, preserved in the Louvre.

"The stele containing the Code of Hammurabi was discovered in 1901 by the Egyptologist Gustav Jéquier, a member of the expedition headed by Jacques de Morgan. The stele was discovered in what is now Khūzestān, Iran (ancient Susa, Elam), where it had been taken as plunder by the Elamite king Shutruk-Nahhunte in the 12th century BC. . . .

"At the top of the stele is a bas-relief image of a Babylonian god (either Marduk or Shamash), with the king of Babylon presenting himself to the god, with his right hand raised to his mouth as a mark of respect.[1] The text covers the bottom portion with the laws written in Akkadian language cuneiform script. The text has been broken down by translators into 282 laws, but this division is arbitrary, since the original text contains no divisional markers" (Wikipedia article on Code of Hammurabi, accessed 02-04-2009).

The Code of Hammurabi applied to medical practice as it mentioned "fees payable to a physician following successful treatment; these varied according to the station of the patient. Similarly, the punishment for the failure of an operation is set out. At least this shows that in Babylon 4000 years ago the medical professional had advanced far enough in public esteeem to warrant the payment of adequate fees" (Jeremy Norman's HistoryofMedicineandtheLifeSciences.com No. 1).