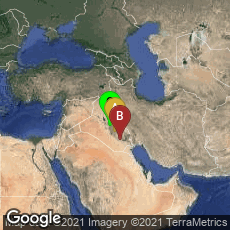 The Code of Ur-Nammu is the oldest surviving law code. It was written in the Sumerian language c. 2100-2050 BCE. Although the preface directly credits the laws to king Ur-Nammu of Ur (2112-2095 BCE), some historians think they should rather be ascribed to his son Shulgi.

"The first copy of the code, in two fragments found at Nippur, was translated by Samuel Kramer in 1952; owing to its partial preservation, only the prologue and 5 of the laws were discernible. Further tablets were found in Ur and translated in 1965, allowing some 40 of the 57 laws to be reconstructed. Another copy found in Sippar contains slight variants.

"Although it is known that earlier law-codes existed, such as the Code of Urukagina, this represents the earliest legal text that is extant. It predated the Code of Hammurabi by some three centuries.

"The laws are arranged in casuistic form of if-(crime), then-(punishment) — a pattern to be followed in nearly all subsequent codes. For the oldest extant law-code known to history, it is considered remarkably advanced, because it institutes fines of monetary compensation for bodily damage, as opposed to the later lex talionis (‘eye for an eye’) principle of Babylonian law; however, the capital crimes of murder, robbery, adultery and rape are punished with death.

"The code reveals a glimpse at societal structure during the 'Sumerian Renaissance'. Beneath the lu-gal ('great man' or king), all members of society belonged to one of two basic strata: The 'lu' or free person, and the slave (male, arad; female geme). The son of a lu was called a dumu-nita until he married, becoming a 'young man' (gurus). A woman (munus) went from being a daughter (dumu-mi), to a wife (dam), then if she outlived her husband, a widow (nu-ma-su) who could remarry" (Wikipedia article on Code of Ur-Nammu, accessed 02-04-2009).