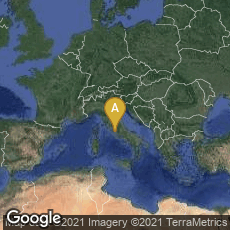 The Vatican obelisk was carved during the reign of Nebkaure Amenemhet II (1992-1985 BCE), and originally stood in the Temple of the Sun at Heliopolis. The Roman emperor Caligula brought it to Rome in 37 CE as one of many tokens of the Roman conquest of Egypt, and had it erected on the spine of his eponymous circus, later renamed for Nero.

In 1585, Pope Sixtus asked Domenico Fontana to move the 330-ton Aswan granite the quarter mile or so to St. Peter's Square. The operation was carried out using hemp ropes and iron bars weighing 40,000 pounds, plus 900 men and 72 horses, and took about 5 months to complete, captivating the city's populace.

In 1590 Italian Architect Domenico Fontana published Della transportatione dell'obelisco Vaticano....in Rome at the press of Domenico Basa. The folio volume contained 2 engraved titles, both signed by Natal Bonifacio, 35 full-page and 3 double-page engravings. It described one of the greatest engineering feats of the Renaissance -- the removal of the Vatican obelisk from its old location behind the sacristy of St. Peter's, where it had been since the reign of Caligula, to its present location in the center of the Piazza of St. Peter. The problem of transporting this 327 ton and fragile stone tower had occupied Italian engineers for many years, so that when Pope Sixtus V appointed a council to consider ways and means of moving the obelisk, nearly 500 men came to submit their plans.

The honor went to Domenico Fontana, the pope's official architect, who proved to the council the feasibility of his proposal by making a scale model in lead. Fontana erected a framed tower of timbers surrounding the obelisk and then by means of ropes attached to the tower raised the obelisk from its pedestal, and afterward lowered it so that it should rest on a wooden platform. This platform he had had drawn on rollers to the new site, where the tower was re-erected and the great stone raised from its horizontal position on the platform to the vertical and set on the new base.  The project required 900 men, 75 horses and untold numbers of pulleys and lengths of rope.

The plates in Fontana's volume also illustrate many of the buildings and designs that Fontana executed for Pope Sixtus V.