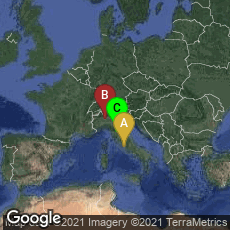 During three or four periods in his life Leonardo da Vinci made over 750 anatomical drawings of all the principal organs of the human body. He also produced some drawings of animal anatomy to contrast it with its human counterparts. Leonardo began recording the results of his private dissections in Milan around 1485. These primarily concerned the organs of the senses, especially the eye, a subject that would have been of special concern to an artist. In 1499 Leonardo returned to Florence where he appears to have access to bodies from the Hospital of Santa Maria Nuova. In a note from about 1505 Leonardo stated that he had dissected at least ten bodies.

During a second period of anatomical work in Milan there is evidence that Leonardo might have collaborated with a young anatomist Marcantonio della Torre (Marc Antonio della Torre), who taught at the Pavia medical school. It is possible that Leonardo intended to produce an illustrated anatomical textbook with della Torre; however this project would have been cut short by Torre’s death from the plague in 1511. The drawings from Leonardo’s second anatomical period in Milan concentrated on the anatomical basis of movement—what might also be called bio-engineering—typically recording the anatomy from various different perspectives.

In his final Italian period, in Rome from 1513 to 1516, Leonardo had access to the Hospital of the Santo Spirito, where he continued to study anatomy, paying particular attention to the heart. Eventually, responding to complaints from another artist, the Pope excluded Leonardo from the hospital, and ended Leonardo’s anatomical studies.

Like the rest of his drawings and notebooks on a wide variety of science and invention, Leonardo seems to have prepared these drawings for his private use—not publication. His habit of recording his notes in mirror-writing shows that contrary to having his ideas disseminated, he wanted to prevent his notes being read by others. Though the anatomical drawings and their interrelated notes record numerous discoveries, we have no documentation that Leonardo allowed any anatomist, except possibly della Torre, to view them. We do know, however, that Albrecht Dürer viewed some of Leonardo’s anatomical drawings on one of his Italian journeys, as he copied one of Leonardo’s illustrations of the upper limb in his Dresden Sketchbook, the basis for Dürer’s treatise on human proportion (1528). In addition it is probable that Leonardo’s contemporary, the anatomist Jacopo Berengario da Carpi, may have seen some of Leonardo’s drawings since Berengario appears to have incorporated into three of the woodcuts of the Isagoge Breves Leonardo’s innovation of showing views of anatomical parts from different perspectives.

After Leonardo’s death his anatomical drawings passed through many hands. They disappeared completely for a century or more until the later part of the eighteenth century when they were discovered in England in the Royal Library at Windsor Castle by the physician, connoisseur, and collector William Hunter (1718-83). Hunter wrote to Albrecht Haller about the drawings, and published a note about them in his last, posthumous book on the history of anatomy: Two Introductory Lectures, Delivered by William Hunter, To his Last Course of Anatomical Lectures . . . . (1784) . However, for the most part the drawings remained unknown to scholars.

Until the advent of sophisticated photographic facsimile techniques at the turn of the twentieth century Leonardo’s anatomical notebooks, with their mutually dependent text and illustrations, could not be accurately reproduced. Thus appreciation of Leonardo’s contributions to anatomy and physiology is primarily a 20th-century phenomenon. The immense task of editing Leonardo’s anatomical notebooks was originally undertaken by G. Piumati, who prepared both literal and critical transcriptions of Leonardo’s text, and Mathias-Duval, professor of anatomy at the École Nationale des Beaux Arts and the Parisian Faculty of Medicine, who provided a French translation as well as a scholarly introduction. Sabachnikoff, who sponsored this project, planned to publish all of the Windsor Castle anatomical drawings in this fashion, but was not able to complete his plan, issuing only reproductions of 61 sheets in Fogli A and Fogli B in 1898 and 1901. A decade later the remaining anatomical drawings (approximately 700) were edited and published by Norwegian scholars under the auspices of the Anatomical Institute of the University of Christiania (University of Oslo) in an edition limited to 250 sets as Quaderni d'anatomia, I-VI; Fogli della Royal Library di Windsor, pubblicati da C.L. Vangensten, A.Fonahn, H.Hopstock. 6 volumes, Christiania, J.Dybwad, 1911-1916. The plates were reproduced in color, with numbered keys on transparent overlays, and Leonardo’s Italian text was transcribed along with translations in both English and German.  Later Kenneth D. Keele and Carlo Pedretti re-edited and republished the entire  collection of Leonardo's anatomical drawings as Corpus of the Anatomical Studies in the Collection of her Majesty the Queen at Windsor Castle. This was issued in a magnificent edition by Johnson Reprint Corporation of New York in 1980.