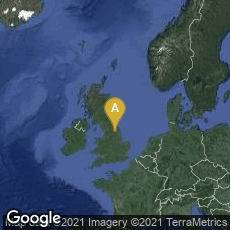 Massacre of the Jewish Community of York, England Reflected in the Survival of a Single Hebrew Manuscript 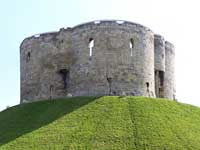 "The site of Clifford's Tower, the keep of York's medieval castle, still bears witness to the most horrifying event in the history of English Jewry. On the night of 16 March 1190, the feast of Shabbat ha-Gadol, the small Jewish community of York was gathered together for protection inside the tower. Rather than perish at the hands of the violent mob that awaited them outside, many of the Jews took their own lives; others died in the flames they had lit, and those who finally surrendered were massacred and murdered. "Understandably, this appalling event has become the most notorious example of antisemitism in medieval England. Yet, it was by no means an isolated incident, but rather the culmination of a tide of violent feeling which swept the country in the early part of 1190" (Clifford's Tower and the Jews of Medieval York [English Heritage, 1995], quoted by http://ddickerson.igc.org/cliffords-tower.html, accessed 02-11-2009).

The Valmadonna English Pentateuch, the supreme treasure of the Valmadonna Trust Library, was written during the first half of 1189. It is the only extant Hebrew book that can be dated to before the expulsion of the Jews by Edward I (Longshanks) in 1290.  "The survival of this manuscript is remarkably fortuitous, as it was completed by its scribe on the eve of a tumultuous period in the history of English Jewry. At the coronation of Richard I in September 1189, a riot began which resulted in an attack on the Jewish community of London and the murder of many of its members. Similar assaults were launched on Jews throughout England during the following year, culminating in a massacre at York in spring 1190. A contemporary chronicler, Ephraim of Bonn, reported that 'The mob which killed the Jews of York then looted the houses of the slain, took away gold and silver and the beautiful books they wrote, more precious than gold . . . and brought them to Cologne and to other places, where they sold them to the Jews.' Ironically, then, the Valmadonna English Pentateuch may have been saved for posterity largely as a result of its having been plundered" (Sotheby's brochure on the Valadonna Trust Library, accessed 02-13-2009).

See also an article in The New York Times online published on February 11, 2009 concerning the offering en bloc of the Valmadonna Trust Library of about 13,000 volumes collected over his lifetime by Jack V. Lunzer: http://www.nytimes.com/2009/02/12/books/12hebr.html.