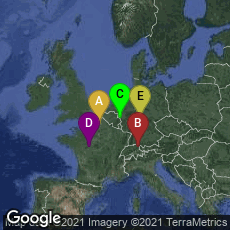 Reproduction of part of a page from the 1973 facsimile of Deutsche Staatsbibliothek Diez B. Sant. 66 containing a Carolingian booklist that has been associated with the library of Charlemagne at Aachen.

The court library of Charlemagne at Aachen set an example for abbey and cathedral scriptoria throughout the Holy Roman Empire.

"The titles of classical books jotted down in a Berlin manuscript circa 790 [Deutsche Staatsbibliothek Diez B. Sant. 66] have been shown to be a partial list of the library at Aachen. It is remarkable for the range and rarity of the authors represented—Sallust, Martial, Lucan, and Cicero, for example—some of whose books had scarcely survived the Merovingian period. Indeed, it is characteristic of many textual traditions propagated in Carolingian times from old (fifth- or sixth-century) manuscripts, with an intermediate stage. Very little that was recopied in the crucial ninth century was subsequently lost, and the diligent collecting of these earlier representatives themselves ensured the survival of many ancient codices in capitals and uncials.

"Many monastic libraries evidently relied upon copies taken from the palace library for their stock. Some such as Corbie on the Somme or St. Martin at Tours, seem to have benefited spectacularly from their close connection to the court. Other books would be bequeathed by wealthy patrons or procured from outside by persistent begging for loans such as Lupus, Abbot of Ferrières (south of Paris) in the mid-ninth century, engaged in for much of his life. Monastic and cathedral libraries also freely exchanged copies of works as they were needed, along regular routes of circulation. France, especially in the north and central areas, had the lions share of this general revival of learning in terms of numbers of books produced, but the old Irish monasteries in Germany — Fulda, Hersfeld, St. Gall-and more modern foundations such as the imperially favored abbey of Lorsch, south of Mainz, also housed and recopied large numbers of manuscripts old and new, some of them of great importance. Of the seven ancient Italian manuscripts on which the text of Virgil rests, at least four were preserved in Carolingian monasteries in France and Germany" (M. Davies, "Medieval Libraries," Stam (ed)., The International Dictionary of Library Histories I [2001] 105-6).