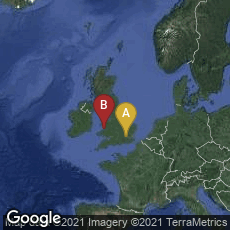 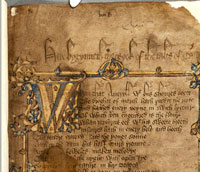 Under the direction of Geoffrey Chaucer, scribe Adam Pinkhurst wrote the Hengwrt manuscript of Chaucer's Canterbury Tales. Chaucer composed a short poem gently chiding a scribe who worked for him named "Adam." In the poem Chaucer scolded the scribe for having so many errors in his manuscripts that Chaucer had to correct them in proofreading. This scribe Professor Lynne Mooney identified as Adam Pinkhurst by comparing the writing of the manuscript with Pinkhurst's signature on an oath Pinkhurst had to sign when he joined the Writers of the Court Letter, predecessor of the Scrivener's Company of London, shortly after 1382. The Hengwrt manuscript of Chaucer is preserved in the National Library of Wales. A digital facsimile is provided by the NLW at this link.

Chaucer's Wordes Unto Adam His Own Scriveyne

Adam scrivener, if ever thee befall

Boece or Troilus for to write new [again],

Under thy longe locks thow maist have the scall,

But [unless] after my makinge thou write mor trew,

So oft a day I mot [must] thy werke renewe It to correct, and eke to rubbe and scrape,

Preserved in the National Library of Wales, in Aberystwyth, where it is known as MS Peniarth 392D, the Hengwrt Chaucer is the earliest and most authoritative manuscript of the Canterbury Tales.

"Recent scholarship has shown that the variant spellings given in the Hengwrt manuscript likely reflect Chaucer's own spelling practices in his East Midlands / London dialect of Middle English, while the Ellesmere text shows evidence of a later attempt to regularise spelling; Hengwrt is therefore probably very close to the original authorial holograph."

"This was one of the collection of manuscripts amassed at the mansion of Hengwrt, near Dolgellau, Gwynedd, by Welsh antiquary Robert Vaughan (c.1592-1667); the collection later passed to the newly-established National Library of Wales as the Peniarth or Hengwrt-Peniarth Manuscripts.

"The Hengwrt manuscript's very early ownership is unknown, but by the 16th century it can be identified as belonging to Fouke Dutton, a draper of Chester who died in 1558.  It then seems to have passed into the ownership of the Bannester family of Chester and Caernarfon, and through them was in the possession of an Andrew Brereton by 1625; by the middle of the 17th century it had been acquired by Vaughan.

"Peniarth MS 392 D contains 250 folios with a page size of around 29 x 20.5 centimetres. It is written on heavily stained and rather damaged parchment. The main textual hand has been identified with one found in several other manuscripts of the period (see below); there are a number of other hands in the manuscript, including one of a person who attempted to fill in several gaps in the text. This has been tentatively identified as the hand of the poet Thomas Hoccleve" Wikipedia article on Hengwrt Chaucer, accessed 02-28-2009).

It is also understood that scribe Adam Pinkhurst, employed by Chaucer, wrote the more famous and more elegant Ellesmere manuscript of Chaucer probably after Chaucer's death. 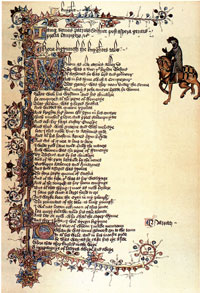 "The early history of the manuscript is uncertain, but it seems to have come into the possession of Thomas de Vere, 12th Earl of Oxford at some point. "The Ellesmere manuscripts began to be assembled by the Lord Chancellor, Sir Thomas Egerton (1540-1617), Baron Ellesmere and Viscount Brackley and were added to by his descendants; he obtained his manuscript of the Tales from Roger, Lord North. The library of manuscripts remained at the Egerton house, Ashridge, Hertfordshire, until 1802 when it was removed to London. Francis Egerton, created Earl of Ellesmere in 1846, inherited the library, and it remained in the family until its sale to Henry Huntington by John Francis Granville Scrope Egerton (1872-1944), 4th Earl of Ellesmere. Huntington purchased the Bridgewater library privately in 1917 through Sotheby’s.

"The Ellesmere manuscript is a highly polished example of scribal workmanship, with a great deal of elaborate illumination and, notably, a series of illustrations of the various narrators of the Tales (including a famous one of Chaucer himself, mounted an a horse). As such, it was clearly a de luxe product, commissioned for a very wealthy patron.

"The manuscript is written on fine vellum and is approximately 400mm by 284mm in size; there are 240 leaves, of which 232 contain the text of the Tales. Though a single scribe was employed, the illustrations were possibly carried out by three different artists" (quotations from Wikipedia article on Ellesmere manuscript, accessed 02-28-2009).

The Ellesmere Chaucer is preserved in The Huntington Library. A digital facsimile of the manuscript is available from huntington.org at this link.