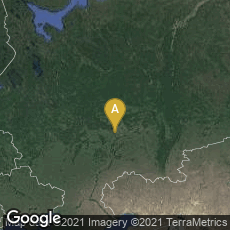 Image Source: en.wikipedia.org
Portrait of  N.I. Lobachevsky by L.D. Kryukov. The first half of the XIX century. Oil on canvas

In 1829-20 Russian mathematician Nicolai Ivanovitch Lobachevskii (Lobachevsky), rector of the Kazan Imperial University, published "O nachalakh geometrii" in Kazanskii vestnik, izdavaemyi pri Imperatorskom Kazamskom Universitete nos. 25, parts 1-2, 27, and 28, parts 1-2 (1829-1830), pp. 178-224, 228-241, 227-243, 251-283, and 571-636. The complete work was illustrated with two folding plates. This was the first published work on non-Euclidean geometry. It appeared in the Messenger of the Kazan Imperial University as a series of five papers beginning three years after Lobachevskii read the text of the first and fundamental paper to his colleagues at the University.

Lobachevskii's geometry represented the culmination of two thousand years of criticism of Euclid's Elements, most particularly Euclid's fifth, or parallel, postulate, which stated that given a line and a point not on the line, there can be drawn through the point one and only one coplanar line not intersecting the given line. As this postulate had stubbornly resisted all attempts (including Lobachevskii's) to prove it as a theorem, Lobachevskii came to the realization that it was possible to construct a logically consistent geometry in which the Euclidean postulate represented a special case of a more general system that allowed for the possibility of hyperbolically curved space. Lobachevskii's system refuted the unique applicability of Euclidean geometry to the real world, and pointed the way to the Einsteinian concept of variably curved space-- "the most consequential and revolutionary step in mathematics since Greek times" (Kline, Mathematical Thought from Ancient to Modern Times [1972] 879).

Lobachevskii was not alone in his efforts to develop a non-Euclidean geometry; indeed, its creation is an example of how the same idea can occur independently to different people at about the same time. Janos Bolyai, who published his own system a few years later, has traditionally shared credit with Lobachevskii for the invention of the new geometry. However, the work of both men in this area was anticipated by that of Carl Friedrich Gauss, which, although unpublished, may possibly have been familiar to them.

Despite this confluence of mathematical thought, non-Euclidean geometry went largely ignored until the 1860s, when it was rediscovered and elaborated upon by a new generation of mathematicians including Jules Hoüel, Eugenio Beltrami and Bernhard Riemann.

The Extreme Rarity of this Publication

One reason that the writings of Lobachevskii and János Bolyai may have received little attention from the scientific community is that both works were published in very small and obscure editions. The periodical Kazanskii vestnik, in which Lobachevskii's work was originally published, seems to have had minimal circulation even within Russia. For the Grolier Club exhibition (1958) on which Horblit's One Hundred Books Famous in Science was based, it was necessary to borrow a set of the journal issues from a Soviet library (either the A.M. Gorki Library of Science or the Moscow University Library), while the Printing and the Mind of Man exhibition in London (1963) found the original edition "unprocurable" and displayed only the 1887 German translation. In 2010 no copies of the original printing were recorded in North American or European institutional libraries. One copy was held in a private collection in America.