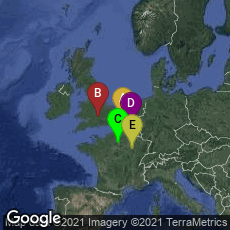 "Paris was of course a major center of the devising and use of alphabetical tools in the thirteenth century. The several motive forces that created the various indexing tools, devices, and procedures flowed into and out from Paris. By the middle of the thirteenth century, it in fact becomes pointless to try to distinguish between Cistercian tools and university tools. The two communities shared at least one activity in common, that of preaching to the laity. After the foundation of a Cistercian house of studies at Paris, the Collège Saint-Bernard, the two institutions shared personnel as well. The indexing method that had been peculiarity Cistercian, the use of marginal letters and changing alphabets as reference systems, was picked up and used by the schools; the A – G reference system, developed by the Paris Dominicans for the concordances, was adapted for their particular needs by the Cistercians of Bruges. Books from the Paris schools invaded Cistercian (as well as Benedictine) libraries, to the point of eclipsing the monastic scriptoria, while indexed Cistercian florilegia from Villers and Clairvaux made their way into the studies of the masters, and the shops of the stationers, in Paris and Oxford.

"One of the archetypical contributions of the University of Paris in this field is the application of indexing techniques to the works of Aristotle. Distinctiones, biblical concordances, and Cistercian indexes were, as we have seen, devoted to those works which constitute the very core of the Christian tradition. At the Paris schools, however, we see for the first time the development of reference works designed to facilitate access to texts for strictly scholarly purposes, without the remotest connection to sermon-preparation. By mid-century, there were alphabetical indexes to the majority of works in the Latin Aristotelian corpus, Old Logic, New Logic, the Ethica, the Libri naturales. Since these reference tools are anonymous, it is obviously impossible to prove that they originate at Paris; but the combination of the two activities, Aristotelian studies and creation of indexes, can point nowhere else at this period" (Rouse & Rouse, Authentic Witnesses: Approaches to Medieval Texts and Manuscripts [1991] 228-28).