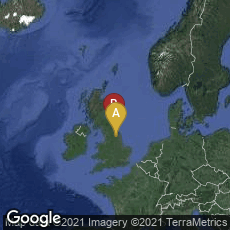 At York Alcuin Collects One of the Finest Libraries North of the Alps: About 100 Books One of the only contemporary portraits of Alcuin, from Österreichische Nationalbibliothek, cod. 652, f. 2v (Fulda, 2nd quarter of 9th century). In this miniature we see Rhabanus Maurus on the left, dedicating his book to Archbishop Otgar of Mainz, who is on the right. Alcuin is in the center. 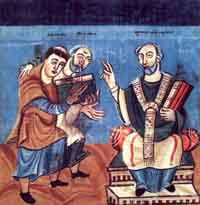 In 1767 the monk Alcuin became head of the episcopal school at the Cathedral of York. This cathedral had been destroyed by fire in 741, and then rebuilt on a grander scale. Alcuin devoted himself to teaching and to building up the library at the Cathedral— one the finest libraries north of the Alps at this time.

"Athough most of Alcuin's writing dates from his residence in Francia, the roots of his formidable learning and capacity lay in the York years, as he himself often made clear. It would seem in fact, that York was the first place in Europe to create a cathedral school of this scale and character. It was the model to which Alcuin turned in his mind while serving Charlemagne in the later part of his life, and he saw himself, in some ways, as its ambassador. It is important, however, not to project back upon this period the scale of later medieval schools and libraries. The closest parallel was Bede's library, built up by Benedict Biscop and Ceolfrith at Monwearmouth-Jarrow, a place that Alcuin knew well and evidently loved. It is possible to conjecture that there may have been up to 250 titles there, but not necessarily so many actual books. it seems that this may actually have been the largest library ever assembled throughout the Anglo-Saxon period. Hardly any of it now remains, though perhaps some of its volumes, or copies of them, could have found their way to York itself. In his York poem, Alcuin proudly lists forty authors whose works adorned the library built up by Aethelbert. To this may be added a further eighteen works from one of the few of Alcuin's writings that can dated to his time in York. It is most unlikely, therefore, that the York library in its heyday exceeded 100 books, some of which Alcuin later exported to Tours. Mostly these would have been kept in chests rather than on open shelves. Among them would have been liturgical books, Bibles, lectionaries, sacramentaries and so forth. To York came requests for the copying of books throughout the eighth and ninth centuries, from the continent, and presumably from within England, itself. Its scriptorium was important and respected, but of the York library itself nothing certain now remains" (Dales & Williams, Alcuin: Theology and Thought [2013] 31).